A baseball-related Who QAed This Shit? It’s as American as an apple-and-hotdog pie*!

Allow me to start by filling in the background for those of you who can’t recall the last time you watched a televised baseball game.

Typically, when a relief pitcher comes into the game, the broadcaster will overlay an box on the screen to provide viewers with some background on the pitcher. This is what’s so delightfully referred to as a “value add” because it immeasurably enriches your viewing experience.

Every network has its own version of the overlay with a layout designed to showcase the information they believe their viewers desperately crave. Here, for instance, is what you get on Comcast SportsNet California, broadcast home of the Oakland Athletics: 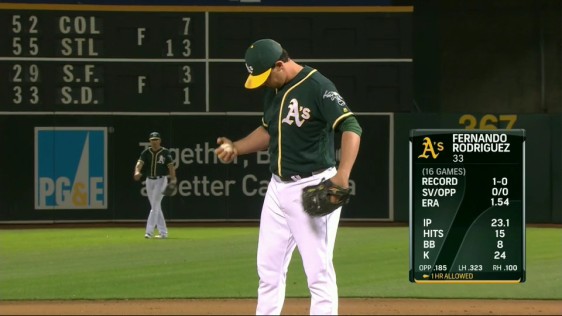 Pretty straightforward. Name, number, team (in case you’ve forgotten which game you’re watching, I suppose), a handful of basic statistics about his performance so far this year*, and, down at the bottom, a single yellow bullet point.

* Occasionally, especially at the beginning of the season, you’ll get last year’s stats or career numbers.

And it all works well–until it doesn’t, as happened last week in a game between the As and the Yankees:

Apparently the UI for creating the overlay prefills the data entry field with a helpful reminder. In haste to get the overlay on viewers’ screens, the stats person didn’t supply a bullet point. Oops.

Now, I’m not suggesting that our unfortunate stats person is responsible for a QA failure. That’s not his or her job.

No, the failure is on some anonymous QA engineer at whatever video software house CSNCA hired to create the overlay code. Either nobody ever tested this scenario, or the bug was prioritized too low.

In all seriousness, however, it’s the software design that’s at fault. The overlay software must* do one of two things:

* I’m using the word in the specification sense. “May” is optional, “must” is not.

** Yes, the As’ TV ratings suck. (That number comes from an article in Forbes last year.)

QA for the Yankees’ YES network, by the way, does the job right: