I was coming home from work the other day–along Richmond Parkway, as it happens–when I witnessed what was, if not the stupidest driving maneuver ever, certainly one of the top ten.

Picture this: I was waiting at a red light, fourth car in line in the right lane. Two cars in the left lane. Nobody in the left turn lane. There’s a small bunch of trees on the corner to the right, which means you can’t see into the cross street until you’re actually in the intersection.

And coming up from behind me is a Mini of some sort*, zipping along at the speed limit, which happens to be 50 along there.

* I think it was a Countryman, but I’m often clueless when it comes to vehicular makes and models.

The driver wasn’t showing any sign of slowing down, and I was starting to get nervous. One doesn’t think of a Mini as “looming”, but this one was unquestionably looming in my rear-view mirror.

And then it veered to the left.

About fifteen seconds later, the light changed to green–which means it had to still be green for the cross street when the idiot went through the red–but nobody moved for a good ten seconds, too stunned by the sight we’d just seen.

My immediate reaction was that the driver must be the same kind of idiot who gets his first vaccination and immediately stops wearing a mask.

On reflection, I think that’s too gentle an assessment. More likely, he hasn’t gotten vaccinated, won’t get vaccinated, and threatens to sue businesses that require customers to be masked because he thinks makes spread disease.

In the interest of keeping you informed of the doings of Xathanael Todd*, I bring you this excerpt from a letter I received from his father on Monday.

* Previous mentions are here and here.

On The Fringe Children’s Theater in Vallejo is presenting an online production of Elephant and Piggy: We Are In A Play. Xathanael has been working there as Assistant Choreographer and Music Director. He is also starring as Gerald.”

Unlike the earlier performance noted above, this production will, in the spirit of the times, be streamed online. Tickets–a mere $5 each, though you can pay more if you wish–are available through Showtix4U, so even those of you who don’t habitually frequent Fairfield, California can attend.

I’m trying to figure out whether I can get some time off one of those days. Working evenings does have a down side.

As you may have gathered, yes, I’m back.

Late March or early April is generally when I post my “State of the Fourth Estate” summary. Last year, I was hoping to send out Demirep to my beta readers in June. I actually beat that estimate. The draft went out in mid-May.

Since then, I’ve written a grand total of zero words of fiction.

What I’ve found is that I need a certain minimum amount of structure in my life in order to write. And even after I returned to work after the lockdown, I had no routine. Schedules changed frequently, responsibilities shifted on a weekly–sometimes daily–basis. And then there were all of those one-off disasters falling into life, both political and personal.

Finally, however, life and work are settling down. I’ve made plans to carve out regular writing times. First for the blog, then for the novels. It’s going to happen. I’m going to make it happen.

Moving on again: see you Friday.

It’s not a Short Attention Span Theater*, but I’ve got a couple of items for you today.

* For reasons too complicated to explain**.

** Which is entirely untrue, but sounds better than “For reasons.”

First up, raise your hands if you remember multimedia artist Xathaneal Todd. Don’t feel embarrassed if you don’t. That was way back in ’15–practically prehistory in blogging terms. You can and should refresh your memory.

It turns out his skills aren’t limited to the material arts. Turns out he’s also a composer and actor.

Okay, I’ll admit I have no proof the musician and performer are the same person as the artist. But how likely is it there might be two, much less three, Xathanael Todds? Of the same age? All living in the Fairfield area?

One of the wonderful things about blogging is the way the unexpected turns up. I’ll admit to having forgotten about Xathanael myself. Until Sunday afternoon when a modest little press release popped up in my mailbox.

I say “modest” because it refrains from waxing eloquent about its subject, choosing instead to simply announce the appearance of Mr. Todd as the star of a forthcoming production of Alladin Jr..

Regrettably, Fairfield is a bit outside my usual range. But if any of you are going to be in the area January 31 through February 2, I’d encourage you to check out the show. You will, of course, be obliged to report back. In detail.

Gratifying as it was to hear from Xathaneal (or his press agent), what really warmed my heart-cockles this past weekend was a story in the Chron.

Remember how, despite all of the Bay Bridge’s well-publicized problems, nobody has ever taken any of the blame? No accountability, no public apologies. And there’s certainly been no indication that Caltrans will do anything differently in the future.

Well, it turns out the Transbay Transit Center officials are made of sterner stuff. The article quotes Mark Zabaneh, the Transbay Joint Powers Authority executive director as saying “Obviously, something went wrong with the process for this to happen.” It goes on to describe–at a very high level, naturally (it is a newspaper, after all)–the review processes during design and construction and then cites Zabaneh again as specifically stating that officials need to find out where they went wrong.

Look, I know that’s a long way from resolving the mess–and we still don’t have even an estimate of when the terminal will reopen*. It’s not even an actual apology. But it is a recognition of responsibility. That’s such a major improvement over Caltrans’ handling of the Bay Bridge Bolt Botch that I’m quite giddy with delight.

* Unofficially, the Chron suggests that the repair work could last well into March, which, with the need for testing the fix, could push the reopening into April. One hopes they won’t cut the new ribbon on the first of the month.

Kudos to Mr. Zabaneh for his honesty. May it continue through the repair and the post-mortem project examination.

I actually left the house over the weekend. OK, so that’s not news on the scale of the wildfires currently destroying California, but it’s unusual enough to be worth noting. The event of such awe-inspiring magnitude to lure me out of my comfortably air-conditioned living room into the decidedly un-conditioned outdoors? 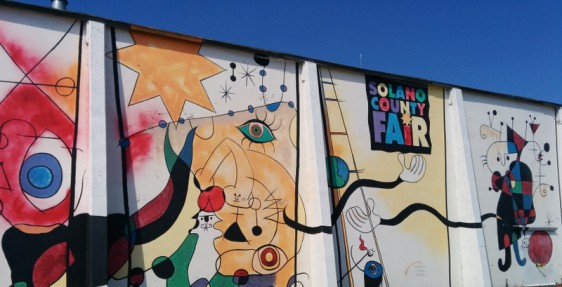 Solano’s fair is a little smaller than the average around here, but it covers the essentials: live animals, incomprehensible art, carnival rides, and extremely unhealthy food. A few highlights:

These guys were awaiting their eventual sale with apparent equanimity. I couldn’t help but think that the wild turkeys that hang out around our place wouldn’t face their fate so calmly–and the wild birds’ multi-colored plumage looks far nicer than the domesticated birds’ plain white.

On the other wing, this group of chickens was trying to earn enough money buy their freedom by forming an 80s metal band. At the time I took the picture, the third member of the group was off auditioning drummers–I think he was talking to the ducks: 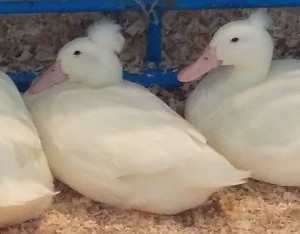 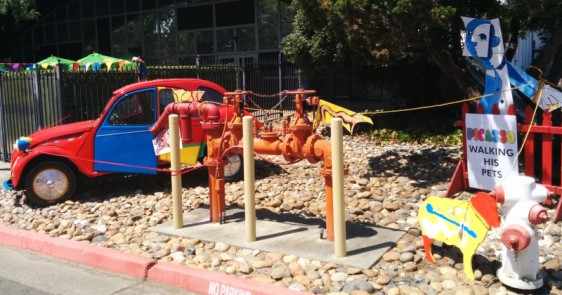 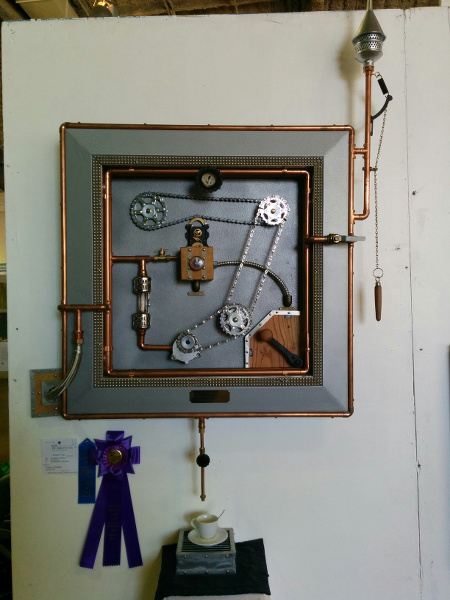 (This Steam Powered Atomic Nuclei Fusion Machine is the creation of Tracy J. Cullen of Benicia. Those of you who share my fascination with kinetic art will be disappointed to hear that it does not actually do anything.) 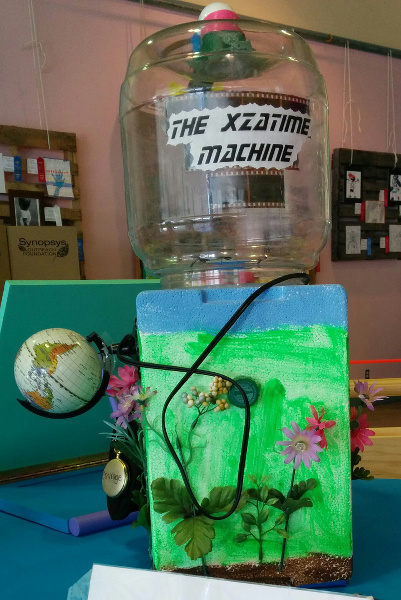 Possibly the most prolific artist represented at the fair was Xathanael Todd of Fairfield. His XZA Time Machine took first place in the Age 9-11 Repurposed Materials category, and he scored prizes in several other categories as well. (The instructions for the time machine are well worth reading:

If art doesn’t work out for Xathanael, he’s got a great future in writing software user documentation.)

We’re not big fans of most rides, but we do have a soft spot for carousels, especially when they have creative animals. The carousel at the Solano fair didn’t disappoint.

From the horse with the dragon-wing saddle, through the incandescent seahorse and the ostrich, to the cat–tail high and mouth full of fish–there was a fine selection of riding critters.

I was disappointed that the carousel didn’t have a traditional steam calliope, but they’re so rare these days that I suppose I can’t really hold it against the operators.

And then there’s the food. Fairs have, as Xathanael would say, “food so that in case you get hungry.” I’d say you would need to be very hungry to properly appreciate it all–and you can interpret that any way you want. 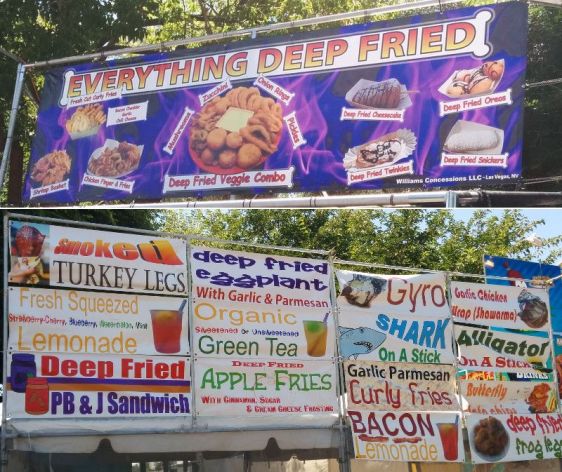 For the record, even for the blog, I wasn’t about to try anything as repellent as bacon lemonade. And, while I was tempted by the dubious joys of shark on a stick or alligator on a stick, I eventually played it safe–OK, safe-ish–and went with the smoked turkey leg, which was quite tasty.

Safety has its limits, though. I had deep fried Oreos for dessert. The Oreo taste came through nicely, but little flavor made it into the dough. A little less batter would have elevated the cookies from tasty enough to excellent.

For the record, the food offerings were the one place where the fair failed us. We checked every booth–twice–and nobody was offering strawberry shortcake! The horror! It’s a perennial fair favorite, and one we had been craving for days. Strawberry-covered funnel cake is a poor substitute.

Strawberry-flavored disappointment aside, we had a good time at the fair. I wouldn’t recommend a cross-country flight–or even a cross-state drive–to visit the Solano County Fair. But I strongly encourage you to put aside your air conditioning and electronic amusements for a day and visit your own local fair.