And after last week’s digression, here we are again, back with the usual crew.

Maggie took a short business trip earlier this week. She didn’t pack until the last minute, so ‘Nuki didn’t have a chance to hang out on his favorite temporary perch.

When she got back, he was taking no chances on missing out again. Less than five minutes after she walked in the door… 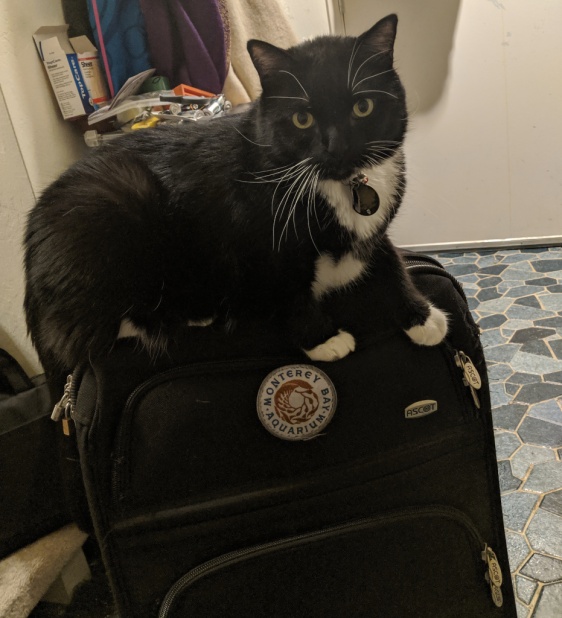 Lefty and Rufus are big on togetherness–though Rufus does sometimes seem a bit relieved when Lefty goes exploring around the house. Most of the time, though, they can be found in tandem.

Naturally, the usual dynamic is that Lefty keeps watch while Rufus sleeps. Wouldn’t do for a hoomin to sneak up and pat his buddy, after all…

Everybody wants to get into the act. 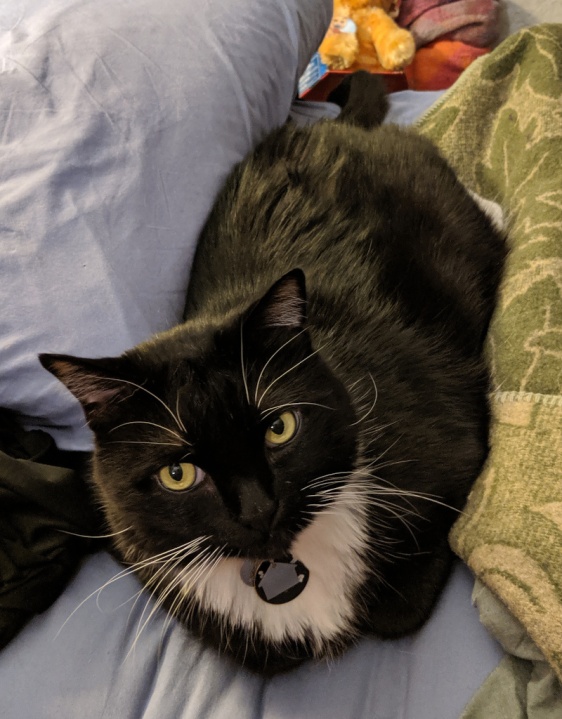 My apologies for the late post. I’m blaming it on the schedule change, so it’ll probably happen occasionally until I settle into the new Wednesday/Friday reality.

It’s a well-known fact that cats cannot sleep unless they’re in a location that inconveniences a human.

Rhubarb is a master of the technique. 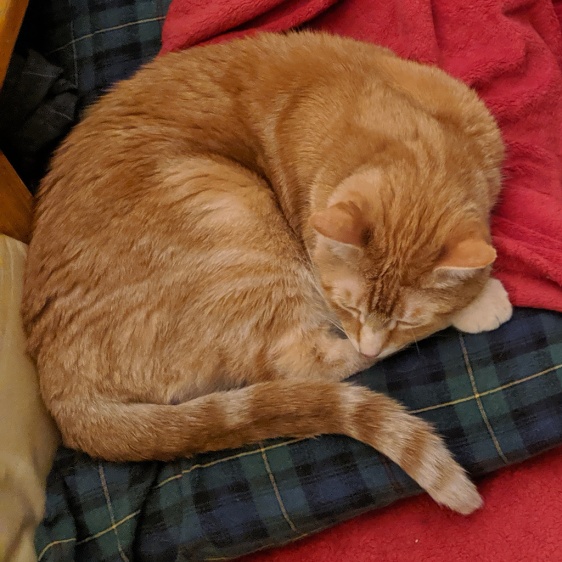 My pillow is a comfy perch, but the fact that it’s my pillow is what makes it possible for him to sleep so soundly.

Yuki hasn’t attained Rhubarb’s level of mastery, but he makes up for it with creativity. 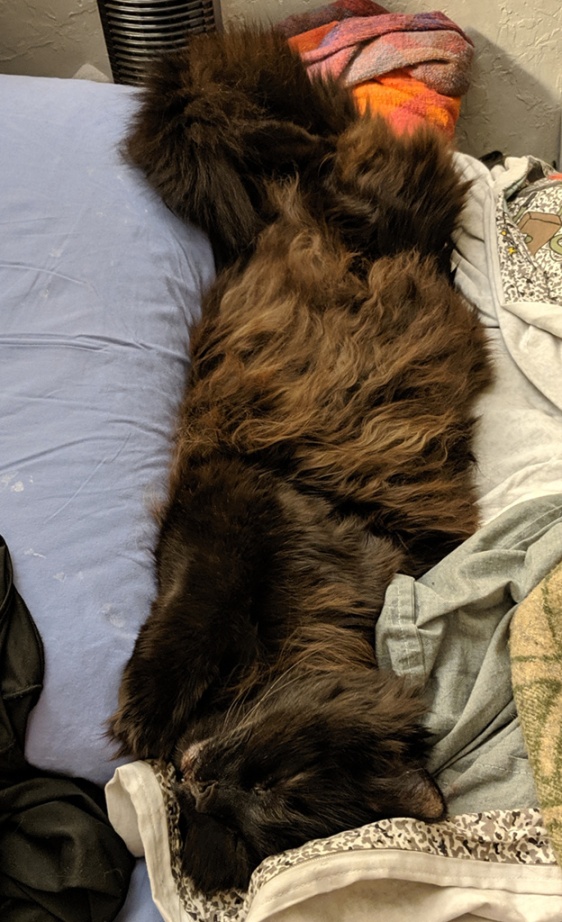 Not only has he blocked access to the entire width of Maggie’s pillow, but he’s done it in a way that emphasizes his cuteness. Who could bear to disturb him? Well, anybody who finds the chance to rub a fuzzy kitty tummy irresistible. But that’s fine with Yuki. He’ll enjoy the cuddles and then go back to sleep. Win/win!

Parenthetically, Rhubarb doesn’t believe he knows all there is to be known about inconvenient sleeping. He’ll steal a good trick from time to time. 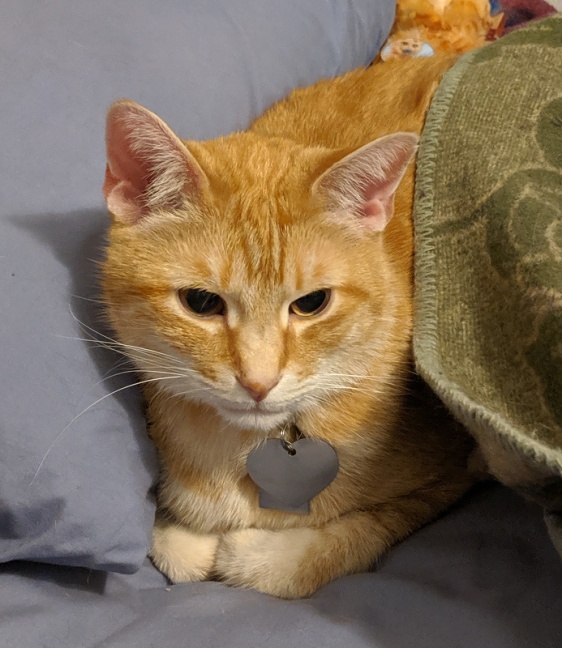 Our household Grand Master of Inconvenient Sleeping, however, is ‘Nuki.

That rug scrap hadn’t been in the house for more than a day before he proclaimed it his favorite sleeping spot. It’s got a comfy deep pile, sunlight for most of the afternoon, and a convenient water bowl.

But its main attraction is that it’s directly in front of the kitchen sink. Now that’s inconvenience! ‘Nuki sleeps more deeply there than anywhere else–I’d never have gotten a shot of him with both eyes closed on a mere pillow.

Sachiko is no longer the twenty-four hour nuclear-propelled hellion she was when she was a kitten.

She’ll be the first to tell you that she’s a big kitty now. And she is–goodness, I just realized she’s approaching her fifth birthday!

Not a huge kitteh, but a bit on the plump side, and a significant armload.

With increasing age comes an increased desire to snooze.

Of course, as a cat, she’s required to pick a spot that will inconvenience the bipeds. 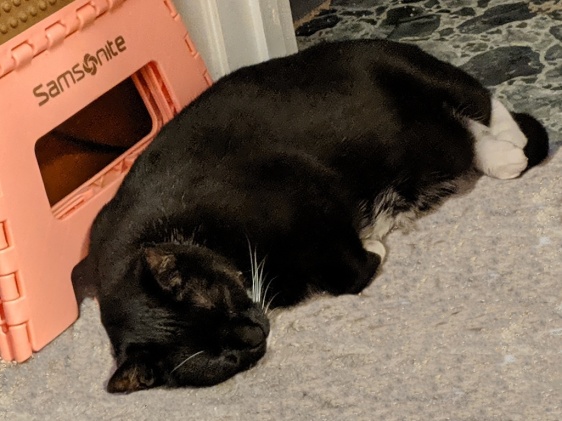 The bathroom doorway is a fine choice. Convenient to the litter box, handy to the food bowls come dinner time, and a high traffic area for the hoomins.

Watanuki has some strange ideas about the proper role of a pillow.

Actually, he has a lot of strange ideas. But a detailed discussion of them all would take us far beyond the space allotted to today’s post, so we’ll stick with pillows. 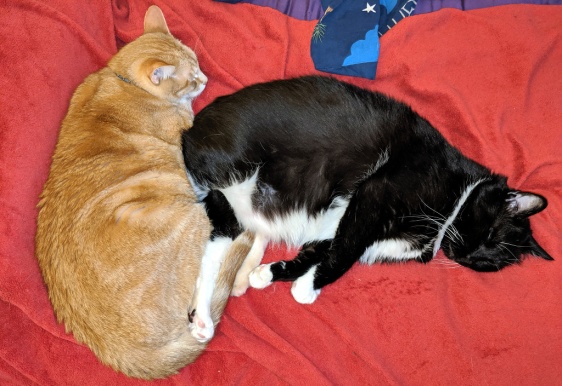 Most people put their head on a pillow. Not Mr. Knuckles.

I’d think he was trying to keep his butt warm, but the temperature was in the nineties the day that picture was taken. Cold buns (not that he really has buns–but I digress) were not the issue.

Meanwhile, Yuki took the usurpation of his favorite head-and-tail-rest in stride. 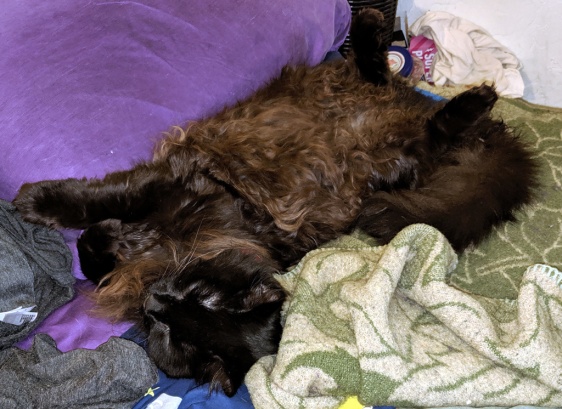 He often finds Maggie’s pillow to be an acceptable alternate Rhubarb. Though it has to be said that I’ve never seen him twist his hindquarters into that position with any other pillow.

Meanwhile, I found the funniest part of the episode to be the way Sachiko completely ignored the boys’ antics. 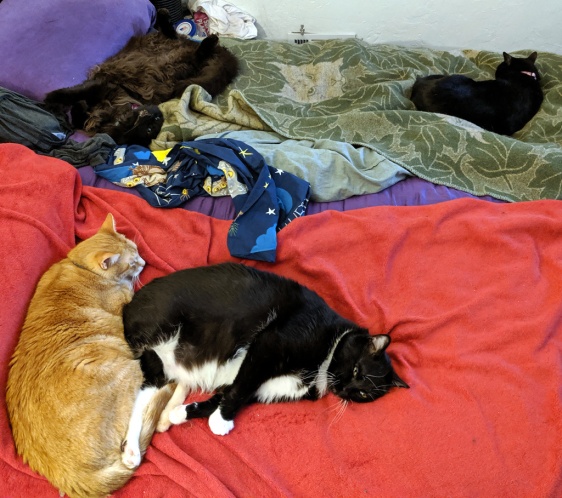 By the time you see this post, I’ll have been in Sedalia for a couple of days. Fortunately, Rhubarb was kind enough to make himself available for photographs before I left.

He’s still one of the most peaceful sleepers around. 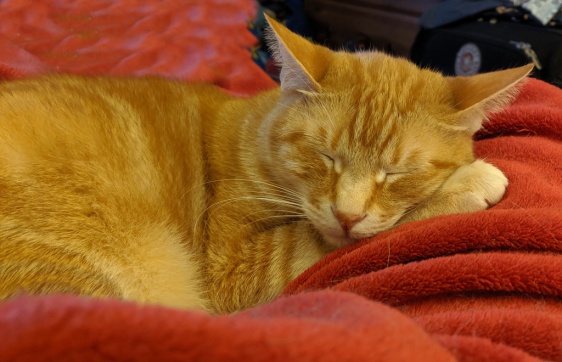 Not just the expression on his face, though that’s delightful enough. But he stays in one position for longer periods of time than most cats. Certainly more than anyone else in our crew other than Rufus.

Nor does he always sleep alone. As we’ve seen in the past, he frequently cuddles with Yuki. Or perhaps “is cuddled by Yuki” would be a better way to put that.

Yuki does often use Rhubarb as a pillow–stability is a virtue in one’s headrest after all–but sometimes he just extends a paw or two, letting Rhubarb know he’s there without getting all demanding. 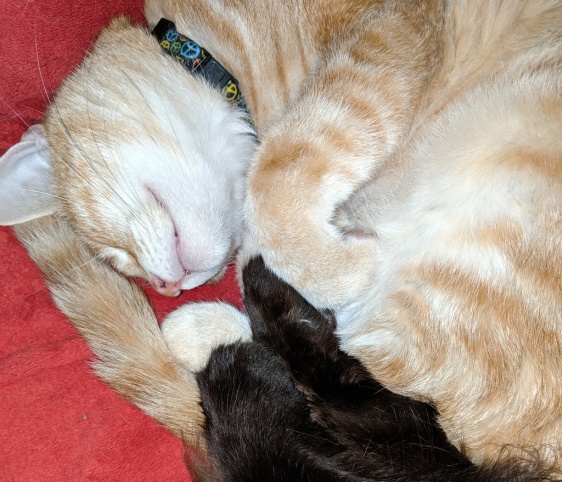 As Casper reminded us yesterday, some things don’t need words.

I know I’ve posted a lot about the Formerly Feral Fellows lately, but I couldn’t resist today’s pictures. I promise I’ll give the rest of the crew some screen time soon. 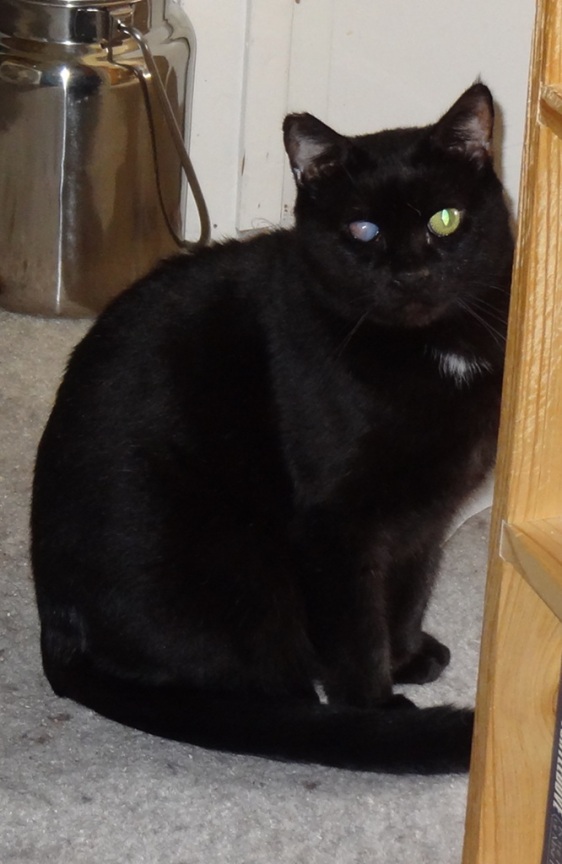 This is, by far, the best picture of Lefty I’ve taken. Admittedly, using a real camera with an actual zoom helped a lot. But even so, Lefty’s growing comfort with allowing us to look at him and point weird boxy things at him helped even more.

He did retreat into his safe space under the futon when I came closer, but I’m fine with that. One paw’s worth of gain at a time is better than we had hoped for.

The reason I stepped beyond Lefty’s comfort zone was to see what Rufus was up to. And the answer was adorable. 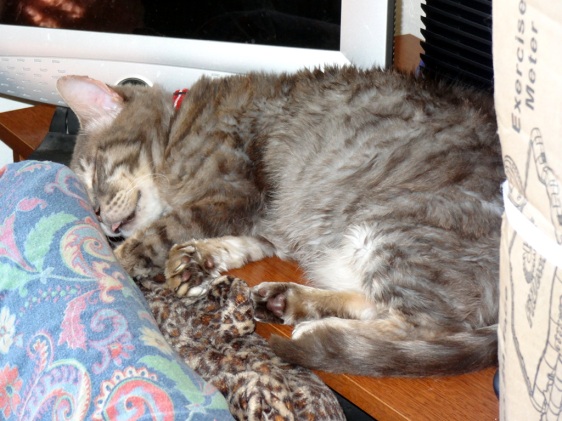 Telephoto helped with this one as well. I couldn’t have gotten close enough to take this shot with my phone; Rufus would certainly have woken up.

Yes, he does look a bit bedraggled. The nap came squarely between grooming sessions, I think. By late afternoon, he was his usual dapper self.

Mind you, I’d prefer he not sleep in front of the computer. I’d rather he didn’t make it so easy for fur to get into the case. But there are tradeoffs in everything, and if he’s happy, I’m willing to open the machine and clean it out periodically. 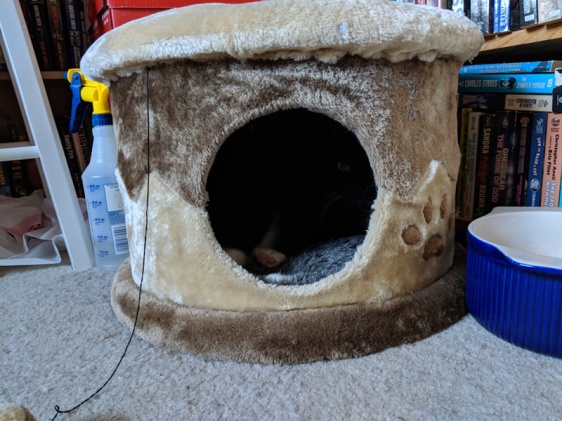 It appears that somebody has staged an invasion. But who would be so dastardly? 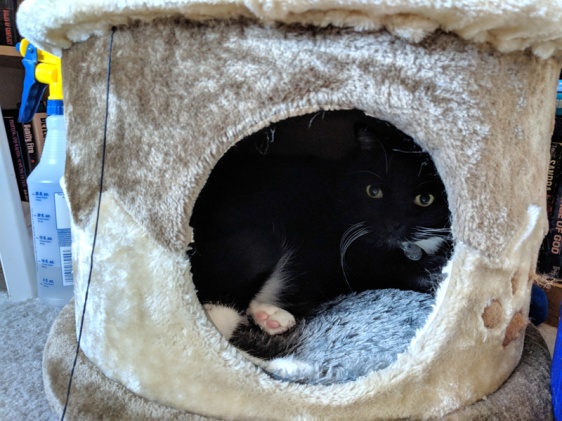 Who but Mr. Thugbutt would be so evil as to take over Rufus’ mushroom? Nobody, of course.

To be fair, it’s not really Rufus‘ mushroom. After all, the mushroom not only predates his arrival in the household, it’s been here longer than Sachiko.

But since it’s in the room Rufus considers his, the mushroom must also be his. (Which means Rufus also owns a computer, a printer, and several thousand books. None of which he’s ever shown any interest in, fortunately.)

No, of course Rufus didn’t fight for the mushroom. He’s a Mellow Fellow, and a pacifist of almost Gandhian proportions.

He knows ‘Nuki will vacate the ‘shroom eventually. And until then? 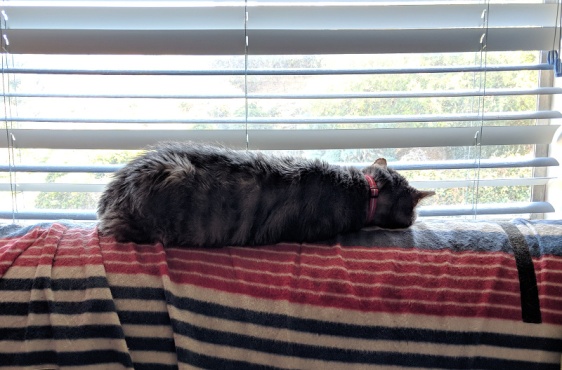 What cat can resist a sun-warmed spot on a comfortable cushion in front of the window? Certainly not Rufus.

Rufus has a new hangout. 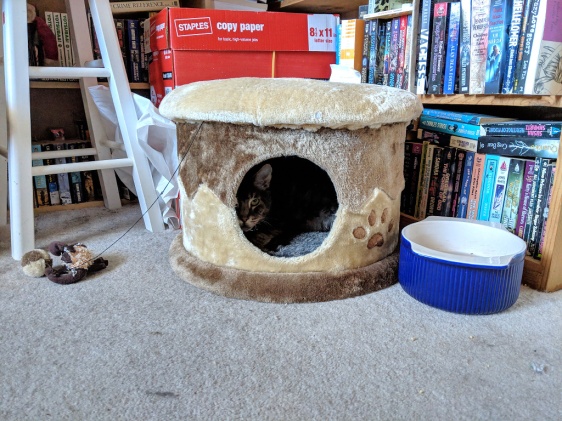 Well, okay, it’s actually an old one. Just about the first place he went when we started letting him explore the space outside his transitional cage.

But we’ve recently rearranged the room and made the mushroom more accessible, and he’s taking full advantage.

And yes, we realize it’s probably supposed to be a tree stump, but really, with that domed cap, it looks more like a mushroom.

And besides, mushrooms are funnier. Especially when they’re cat-stuffed mushrooms.

Anyway, that dubious look is rather atypical for the normally mellow Mr. Alexander. But at the time I took the picture, he’d just finished a round of territorial negotiation with ‘Nuki, so any unusual activity was cause for suspicion. 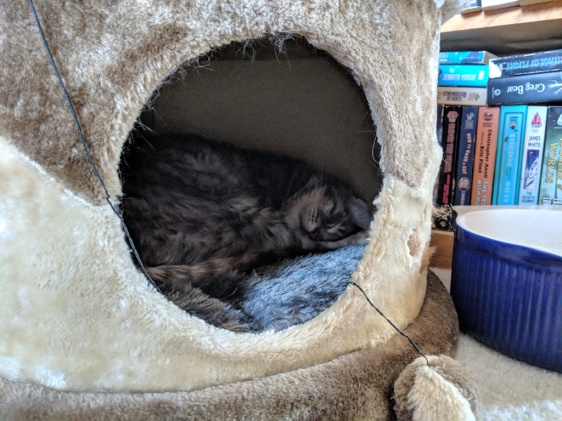 Yes, he was snoring. And the mushroom acts as a resonator. I won’t say the walls were shaking–but they may have quivered a bit.