Once a product hits the thrift store, it’s much too late to make corrections to the packaging. But perhaps this can serve as a cautionary lesson. 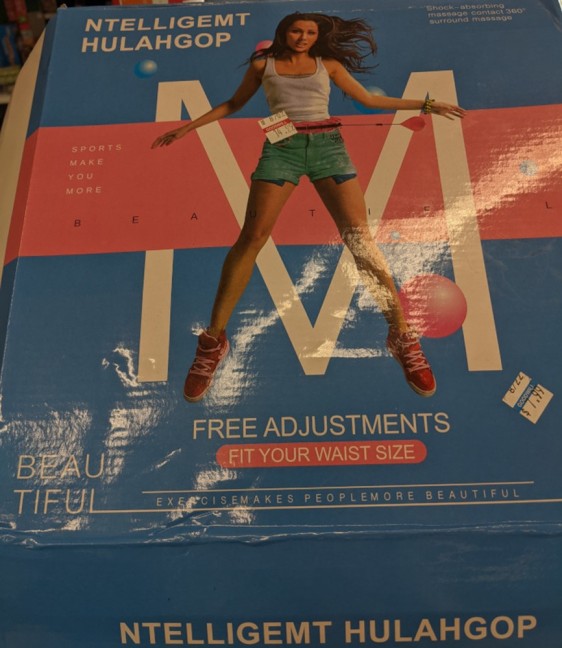 I understand the need to find a unique name for your company and product, but some approaches to the problem are just wrong. That includes all of the approaches used here.

How exactly does one pronounce “ntelligemt”? I’m guessing the “n” is pronounced “in”. That’s fairly standard. But is that a hard or soft “g”? “gehmt” doesn’t exactly fall trippingly off the tongue, but “jehmt” isn’t an improvement. The soft “g” might work if it weren’t for the “m”, but we’re stuck with that.

Then there’s “hulahgop”. I’m sure whoever came up with the name wanted something to suggest “hula hoop” without actually violating Wham-O’s trademark. And, yeah, okay, a “G” looks like an “O”. But we’ve got a pronunciation problem here too. It’s not the “G” so much as the “H” that precedes it. “huhgahp”? “huhjahp”? Maybe we can say the “H” is silent; “hulagahp” almost works, and “hulajahp” is even better–as long as one ignores the ease with which it could be mispronounced as a well-known derogatory slang term.

Matters don’t get any better once we move past those names.

Who thought it was a good idea to break up the word “beautiful”. I don’t know about you, but I can only assume that Beau Tiful was Beau Brummel’s lesser-known brother.

And why the missing spaces in the tagline? “exercisemakes peoplemore beautiful” Is it supposed to convey a message? Other than “Nobody associated with the product has ever bothered to learn English”. That’s the message I get.

And it’s one that’s reinforced by “free adjustments”. I suspect they meant “freely adjustable”, but the way it’s phrased, it suggests I’ll need to take it to a shop to have the belt tightened or loosened to fit my waist–but at least the shop won’t charge me for the service.

Finally, there’s that block of text at the upper left. In case you can’t read it in the picture, what it says is:

Wait, what? This is a massager? I thought it was exercise equipment.

But I guess it makes sense. Doesn’t everyone like a vigorous stomach massage while jumping up and down? I know that would help me lose weight: five minutes and I’ll be getting rid of everything I’ve eaten for the past week.

Hard to believe it’s been more than four years since the last WQTS* post. Granted, last year probably shouldn’t count. It’s not like any of us have had opportunities to encounter the results of egregiously bad testing recently. But still.

* For those of you who’ve started reading since June of 2017, or whose memories don’t extend that far back, the acronym expands to Who QAd This Shit. It’s where I mock products that were improperly tested, insufficiently tested, or–a closely related discipline–never granted a design review.

We took the car in for service yesterday–the Toyota, not The Bug. Aside from the semi-annual maintenance, it also needed a new battery. Generally, when it comes to matters automotive, we rely on experts for diagnosis, but it didn’t take much expertise for us to figure that a battery that had been in service for seven years and occasionally failed to hold enough charge overnight to start the car was about due for retirement.

Guess what happens to the radio when the battery is replaced. Go ahead, I’ll wait.

If you guess that it reverts to its default settings, you’re right. Partially.

For the record, the radio in question is the KD-HDR30, made by JVC. To be fair, it is, like the car, more than a decade old; nobody’s going to be buying one today. And there is a chance that JVC’s more recent units radios were designed and built following more rigorous design and testing processes.

The radio itself reverts to the defaults. The add-on modules that give it additional capabilities don’t. So the SiriusXM module remembered our station presets, but the radio switched to its built-in FM tuner.

That’s actually a reasonable default. It doesn’t make sense for the radio to assume the presence of optional hardware. What’s less sensical–and points to inadequate testing and/or design review–is that the FM station presets were gone.

Who thought it was a good idea to withhold capabilities from the base unit that were given to an optional component–the satellite radio plug-in? Clearly, somebody who didn’t think the radio could lose all power after installation.

Wait, it gets worse. The base radio component apparently has no ability to remember anything. Every single setting reverted to the defaults. So the FM tuner was at the top of the dial and the volume was at the exact middle of the range, two ticks higher than we had left it. Annoying, but one has to set the default values somewhere, and those choices have some logic behind them.

Less logical, when we switched inputs to SiriusXM, we discovered that the radio’s default display was the time remaining in the current song. Not the title (our preference) the artist, or even the channel. The time remaining. Who chose that? Realistically, nobody did. Nobody defined the default behavior, so a developer chose the first item in the list of options. Presumably, it was the same developer who put the list of options in their current order. And most likely, that order came straight out of a list of capabilities someone gave him.

If some QA person questioned the behavior, the business owner or project manager decided there wasn’t time to fix it: “If we change the order of the list, every feature that refers to the list will need to be changed; that means reworking and retesting every menu selection. And if we start setting exceptions for the defaults, instead of always choosing the first possibility, we’ll have to decide what those exceptions are, recode the initialization sequence, and retest. For something that only happens once, when the radio is installed.” Because, of course, we all know the radio is connected to a battery, so it can’t lose power.

The really egregious design issue, however–and the one that convinces me that there were no design reviews and possibly no QA–is that by default, the radio goes into a store demo mode. That means the display cycles endlessly through a list of the radio’s features. Why would anyone want to see the list after they’ve purchased the radio?

Turning the demo mode off requires the user to find a menu semi-hidden behind a long press on a button that normally does other things, locate demo mode in that menu, turn it off, and save the setting before the menu times out and returns the radio to its normal display.

Why is this the default? Granted, any unit could be used as a store display. I’ll even grant that a store display unit is more likely to lose power than one installed in an actual customer’s car. But making every unit default to store mode suggests that either the radio is the victim of poor design practices and less-than-adequate QA, or that JVC prioritizes stores’ convenience over customers’.