Apologies for the belated post. Life continues chaotically here. With a little luck, we can get back on our regular schedule next week.

In the meantime, however, please enjoy this picture from my archives. Why this one? Mostly because it enabled the post title, and I couldn’t resist. 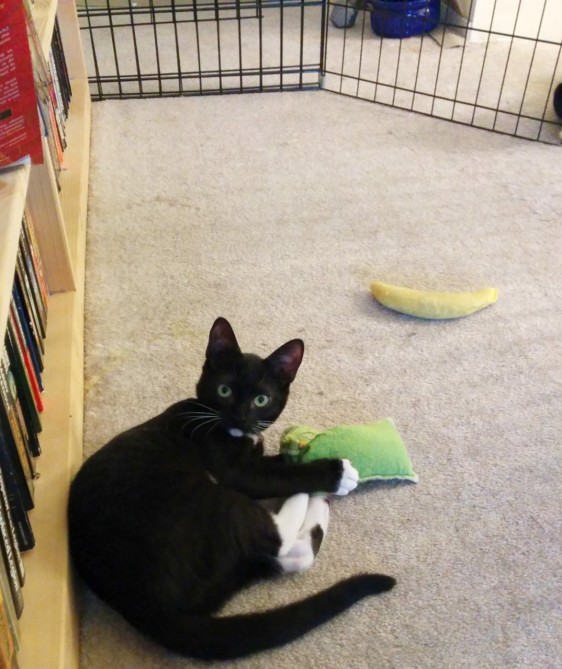 Sachiko at approximately five months, discovering the joys of her very own catnip toys.

The bride and groom? Pfft. 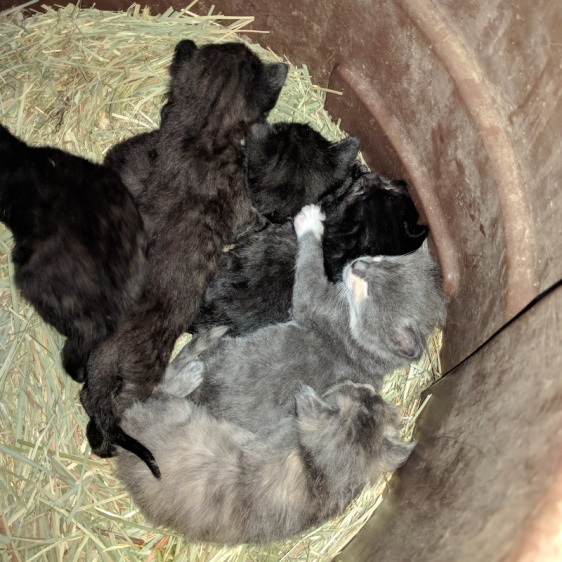 Who could be more important than two-week old kittens?

It occurs to me, by the way, that I can’t be the only person more willing to go to a wedding if it came with a barrel of kittens. If you’re having trouble getting guests to return their RSVP cards, you might mention the guests of honor.

Their mother was pretty chill too. 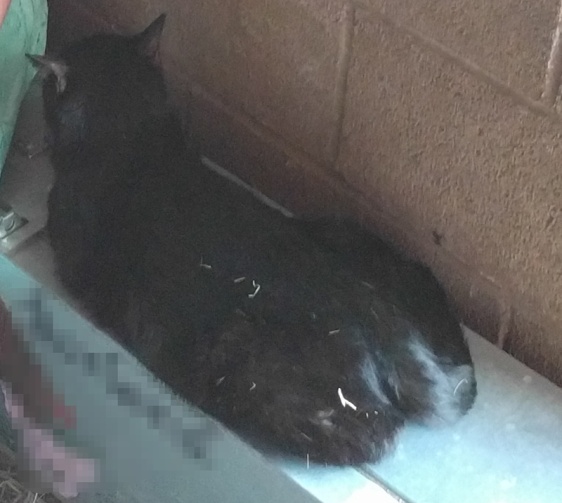 She accepted congratulatory pettings with a dignified air. While she wasn’t playing “all you can eat buffet” with the kids. That’ll ruin your dignity in no time.

Nor were they the only important attendees. 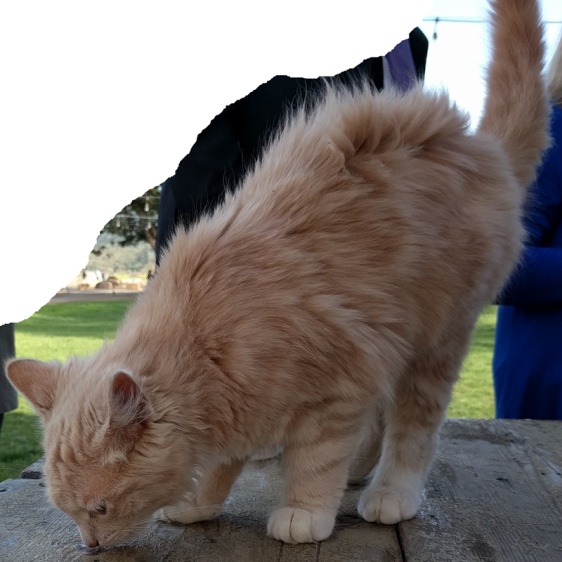 I’m fairly sure this young lady is a cousin. She was doing a meet, greet, and eat during the cocktail hour. Oddly, I didn’t see her at the dinner. She must have had a pressing engagement elsewhere.

Just to be clear, none of the four-legged attendees came home with us.

Into every life some kittens must fall… 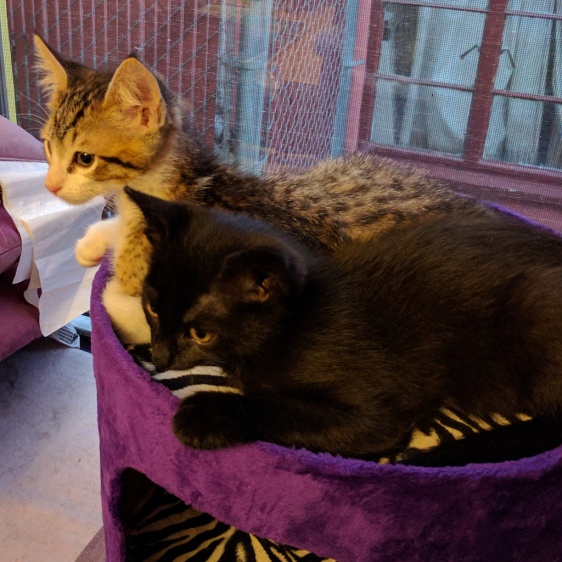 Yes, I know those names traditionally go the other way around. But try telling that to the furbeasts. Getting a picture of them in the same place at the same time and not moving wasn’t easy. No way was I going to sacrifice the photo op by trying to get them to exchange places.

No, we’re not theirs. We’ve said it before: our limit is seven. Mr. Fort and Ms. Nickname-to-be-determined are the new feline overlords of our friends Eric and Beth.

Patience is the brains of the outfit. She’s the one who leads their voyages of exploration and who figures out how toys work. 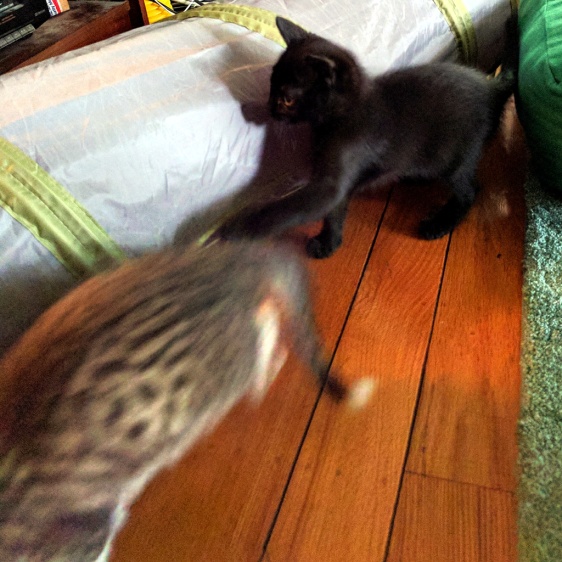 Of course, her ambition does sometimes lead her into territory where she probably shouldn’t go. 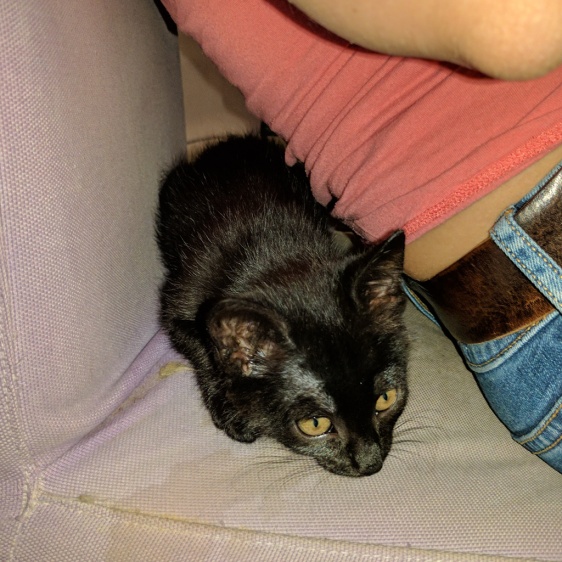 Despite what this next picture might suggest, Fortitude is no more likely than his sister to stay still very long. That said, as the team’s muscle, he does burn a lot of energy, and he’s likely to go from flying across the floor to snoring before he even comes to a halt. 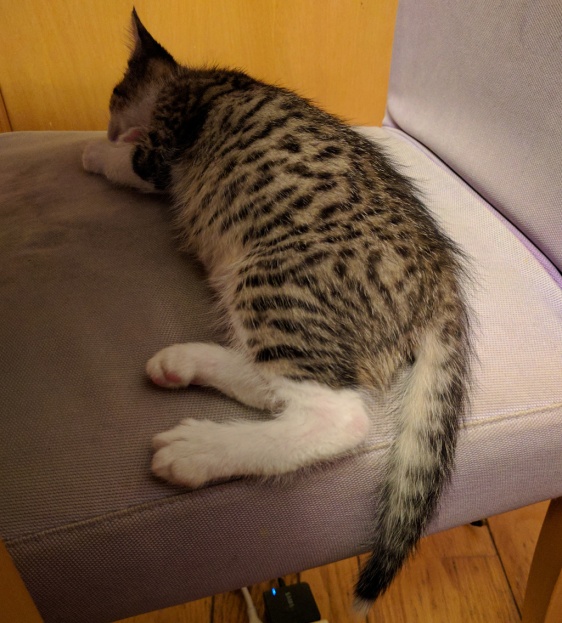 He is a bit more photogenic than his sister. She’s handicapped by her all-black coloration. He not only has those lovely leopard spots, but also the white blob at the tip of his tail and the cute pink toe-pads.

But they’re both cuties, and we’re delighted to welcome them to our extended family. (And for those of you keeping track, yes, they are rescue kitties.)

Beth, Eric, feel free to put links to your photo collections of the kids in the comments.

According to Adweek, CNN claims ISIS is using Nutella and kittens to recruit women.

How sexist is that? Why are ISIS and CNN assuming that only women will be attracted to a violent, repressive regime by kittens? I know plenty of men who would be quite susceptible to kitten-oriented recruitment techniques.

Then there’s the whole Nutella question. Does anyone like chocolate hazelnut spread enough to leave their comfortable life in search of a jar? It’s not like you can’t find it on the local convenience store shelves if you have an irrational craving.

As a writer, I shouldn’t admit it, but I really couldn’t make up anything this ridiculous. And even if I did, I wouldn’t be able to sell it.

Elevators have been around for more than two thousand years. The modern safety elevator was introduced in 1852. I had assumed that by now the elevator was well-understood technology. Apparently not at Caltrans.

There’s a service elevator on the bridge. It was installed for a very sensible reason: workers need a way to get to the top of the tower to do inspections and maintenance. Once the original elevator design was introduced, bridge officials requested changes to support an additional use: tourism. No, they weren’t thinking of making the top of the Bay Bridge tower into a popular destination on a par with Coit Tower. They wanted to use it as a tool to sell bonds to pay for the bridge.

I’m unsure how they thought that would work. Given my own feelings about heights, I suspect the most successful technique would be to take prospects to the top of the tower and then refuse to let them leave until they signed a purchase request. But that would probably violate a few dozen laws.

Anyway, the design was changed to include large windows to improve the view. In the focus on scope creep in the elevator cab, though, apparently nobody reviewed the design of the system as a whole.

Elevators move in straight lines. Usually, but not always vertical lines. They can cope with diagonals if the shaft is properly built: some of the cab’s weight rests on guide rails, instead of placing all of the weight on the cables. What they can’t handle well are changes of direction.

Remember why the bridge design was chosen? The selection committee wanted something unique. We all know how that turned out. Now we know that, not only is the bridge unique, so is its elevator. The lower half of the ascent is angled inward (toward the tower) and halfway up it changes to an angle out away from the tower. According to the manufacturer, no other elevator has a similar multi-angled path. Lovely.

In practice, the elevator lasted just over a month–from December 5 to January 8–before its drive shaft failed. Actually, the elevator was only in operation for a couple of weeks, thanks to a door failure that idled it from December 7 to 23.

At least bridge commuters won’t have to pay for the repairs. The elevator is still under warranty.

You know, I tried to turn the tale of the Bay Bridge Bolt Botch into a short story. I couldn’t rationalize all of the problems believably enough to make a coherent narrative.

On Tuesday, “School closings” was the third most popular search on Google. Not surprising, given the sub-arctic conditions covering most of the US.

Wednesday, Vanilla Ice was arrested on charges of burglary and grand theft.

Clearly this is a very bad week for ice.

And if I wrote something like this into a book, reviewers would slam me for “lack of realism” and use of “convenient coincidence”. 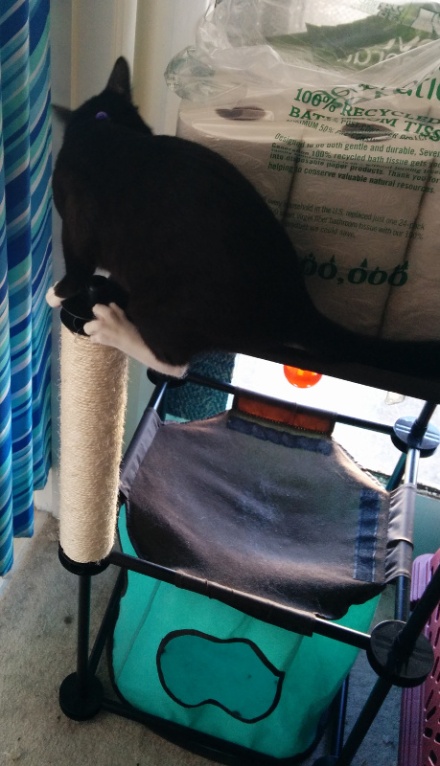 Sachiko’s integration into the household continues.

She’s explored most of the floor and has moved on to second and third levels of stuff. We confidently expect to find her dangling upside down from the ceiling fan once we let her start exploring without supervision.

Yes, we’re still watching her excursions carefully. She’s establishing relations with her elders, and a mediator is sometimes necessary. 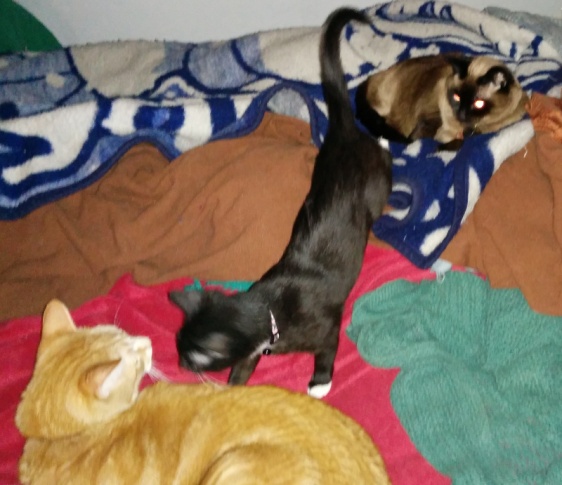 Kokoro and Rhubarb are, well, to put the best interpretation on it, dubious about her. 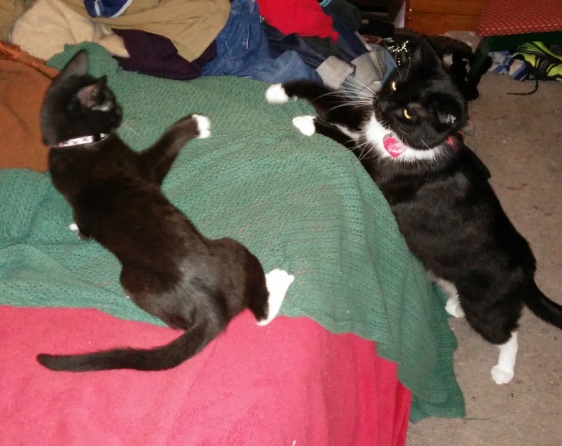 Watanuki is a creature of extremes, and that carries over into his view of the Pointy Princess. At times he seems favorably inclined, sharing toys and even his precious catnip cushion, and then she demonstrates how she got her nickname, and he reminds her of the old dictum about age and treachery.

Kaja’s reaction to Sachiko sounds quite similar to https://www.youtube.com/watch?v=mWzXb38VyJQ We haven’t managed to snag a picture of them together. Eventually. 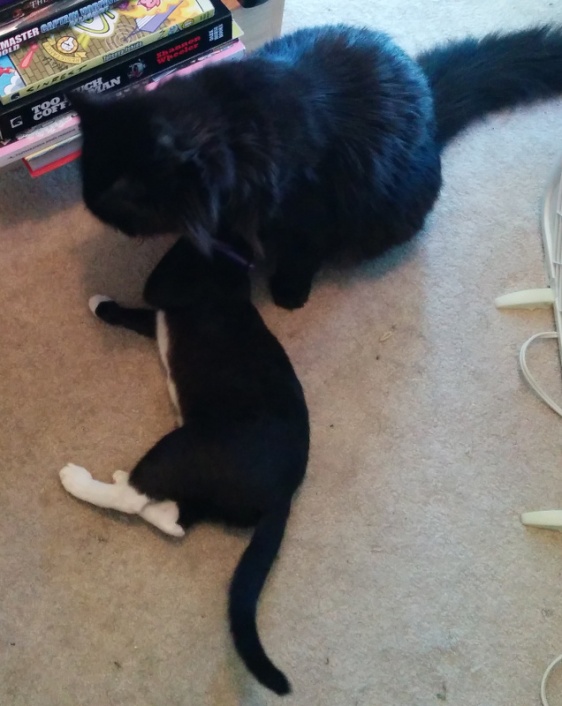 The oddest relationship is with Yuki. He and Sachikitten seem to share a strange bond of fascination. Whenever she’s out in public, he’s in the vicinity, watching her carefully. Unless she’s forcibly restrained, she leaps on him, bites his ears, and chews on his tail–behavior she doesn’t exhibit with any of the other cats. No matter how much provocation she offers, though, he never bites back, and only rarely cuffs her.

She’s still running us ragged, scarfing down enough food to feed the entire family, and spazzing out on the slightest excuse, but she’s making progress. 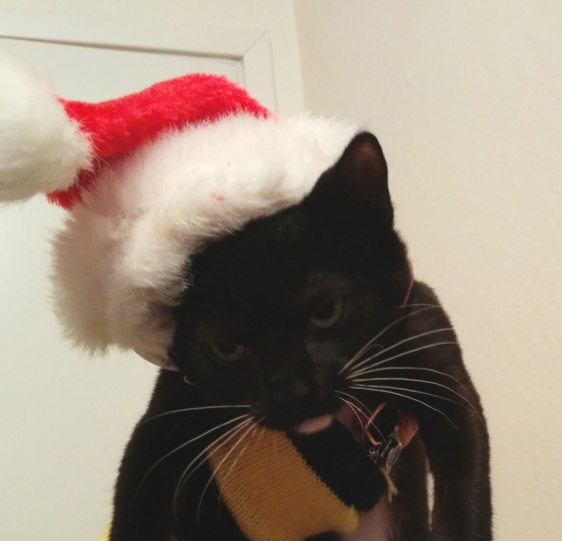 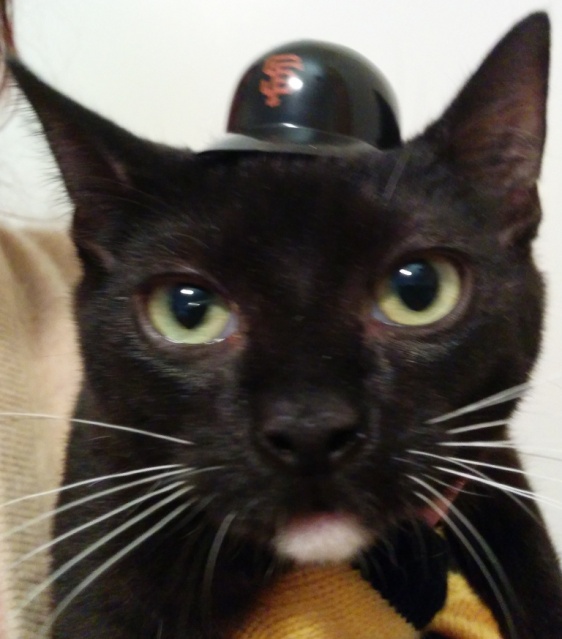 What, you were expecting a Santa hat? Not in this house! We’re bringing Sachiko* up in the True Faith, after all.

* Yes, it’s true. The Kitten To Be Named Later has been named. Depending on how it’s written, “Sachiko” can mean “child of bliss” or “happiness”. She’s a happy kitten, and–if the Giants continue to play well–should remain a happy cat.

Am I disappointed that she hasn’t chosen to follow the Way of the Mariners? A little. But since she’s a Bay Area native, I understand her desire to cheer for a local team.

I can only speculate about why she chose the Giants over the As. She’s definitely a hands-on sort. Wants to do it all. I suspect that she simply doesn’t approve of the designated hitter rule.

The Kitten To Be Named Later remains formally unnamed. Should this situation continue, she’ll probably wind up as Little Bit, thereby ensuring that she’ll grow up to weigh eighteen pounds. 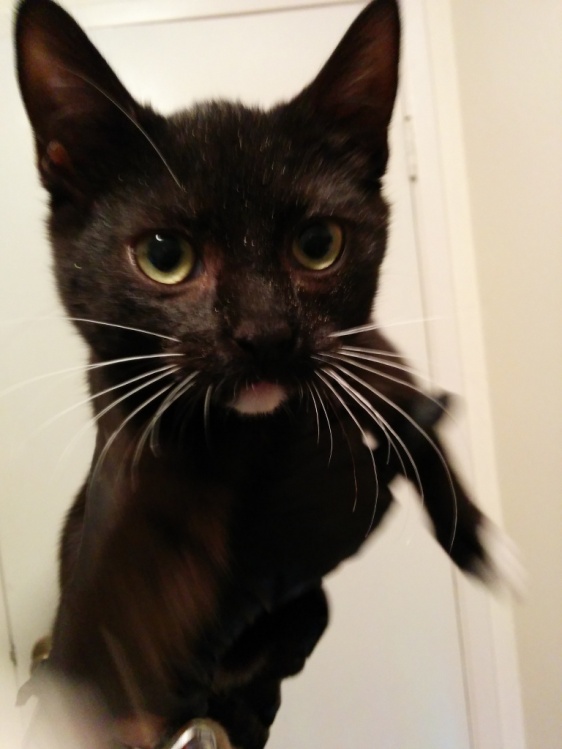 Name aside, she is a most striking kitten. She strikes her toys. She strikes Maggie and me. Last night, in one of her first interactions with her siblings, she struck Yuki. Bopped him a good one on the nose when he got into her personal space–which apparently consists of an oblate spheroid with a diameter of approximately eight thousand miles.*

* It hasn’t been officially announced, but I understand she’s also claimed the larger, yellow spheroid some ninety-three million miles away. 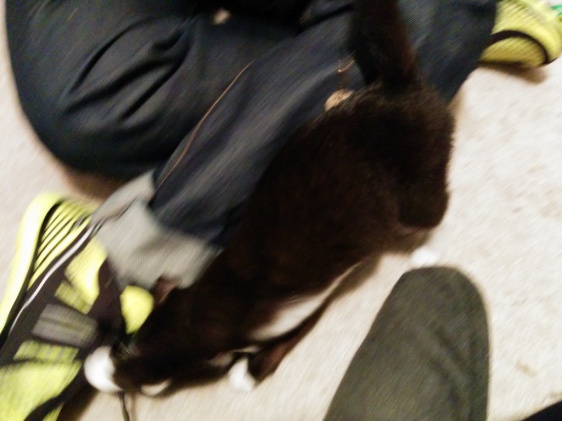 Nor is striking her only skill. She’s almost seen here in a furious assault on Maggie’s shoelace.

Her favorite toy is whatever happens to be dangling above her head. We’ve seen more leaps, flips, somersaults, and tumbles in the past few weeks than in all of the last four Olympic gymnastics events combined. The leaps are especially impressive. We’ve seen her stand on her hind legs and jump upward high enough to get her hind feet above where her head was before the jump.

And that’s no small distance. She’s gotten past the novelty of eating everything put in front of her and demanding more, but she’s still eating enthusiastically*. She’s more than doubled in size and weight since we brought her inside–hence our fear that “Little Bit” will be a case of naming by contraries.

* Her favorite food is venison gooshy food. Clearly she remembers the deer who inhabit our neighborhood and still harbors hopes of bringing one of them down.

In recognition of her physical stature, we’ve begun to allow her to wear jewelry. Hopefully, being at the same level of dress as her siblings will simplify introductions. (Translation: She’s got a bell, just like they do, so nobody can sneak up on anyone else.)

Well suited to her personality…