A few further comments on my iPod rebuild, now that I’ve had a little time to play with the device and have started to get the hang of Rockbox.

The flash drive is much lighter. Those few grams may not seem like much, but you notice the difference. And, since there are no moving parts, using a modified iPod on the go feels more comfortable. Exercise? Potholed roads? Sure, go ahead. Better yet, add a cheap Bluetooth transmitter that plugs into the headphone jack, and you can do away with that annoying wires to your headphones or the car stereo’s aux jack.

If you’re doing the hard drive replacement, it’s a good time to look at your iPod’s battery life. On the one hand, opening an iPod Classic is such a pain that you might want to save yourself some trouble and expense by swapping in a new battery at the same time you put in the flash card. On the other hand, the flash card uses so much less power, you may not need to replace the battery to get adequate life.

Not only does the flash card use less power than the original hard drive, it’s much faster. When I did some tests with Rockbox prior to the drive replacement, it took hours for the software to build its database of music. After the replacement, with about five times as many tracks, building the database took less than ten minutes.

Similarly, there’s no lag between tracks. Unlike the hard drive, there’s no spin-up time when the iPod wakes up the flash drive. Well, okay, there is, but it’s measured in fractions of a second instead of multiples of a second.

Rockbox supports music in many formats that Apple’s software doesn’t know anything about. If you keep your music in a flac format for the best possible sound on your computer, loading it to an iPod via iTunes requires converting it to aac or mp3. Sure, iTunes takes care of that for you, but it still takes time and you wind up storing a duplicate copy. Why waste the space on your computer–not everyone has a 50 terabyte server in their home office. Admittedly, the music may not sound any better on the iPod–let’s be honest, even when the iPod Classic was new, there were complaints about the sound quality–but it’s certainly not going to sound any worse either.

To be fair, everything isn’t wonderful in Rockbox-land.

It doesn’t work exactly like the original iPod software. Buttons do some different things, so there is a learning curve.

You can still use iTunes, but you don’t have to. Be aware that if you don’t, you lose Apple’s music management, metadata editing, and playlist generation. Those can all be replaced, but if you’re comfortable with Apple’s approach, you might want to stick with iTunes.

If you do stick with iTunes, however, you should know that some versions have a limit on the number of tracks you can store and the number of tracks per playlist. On some older versions, those limits may be as low as 100 per playlist and 25,000 total. If you like the “I forgot I owned that” moment of discovery that comes from setting your device on “shuffle” and letting it skip around through your entire library, 100 tracks isn’t going to work for you.

Rockbox also has a playlist limit (although there’s no total track limit). However, unlike Apple, you can change it. By default, the limit is 1,000 tracks. The “Settings” screen will allow you to change it to 32,000, but if you’re willing to live on the edge*, you can crank it up as high as you want. For the record, I have around 42,000 tracks–I’ve been buying music for four decades and I’m a packrat–so I set the limit at 64,000 tracks.

* The documentation warns that this can result in memory shortages, but so far at least, I haven’t had any problems. (As a reminder to myself, to set a limit higher than 32,000, you copy Rockbox’s “config.cfg” to “fixed.cfg” and edit the new file with any text editor. Delete the lines you don’t need and change the track limit to whatever you want. When you turn on the iPod, config.cfg gets loaded first, then anything in fixed.cfg replaces the settings in config.cfg. That allows you to make changes while you’re listening to music, but always return to your normal setup at power-on.)

Rockbox isn’t as polished as Apple’s iPod software, but it more than gets the job done. I love having 42,000 tracks in my backpack. Assuming the average song is five minutes long, that gives me more than three months of continuous music and comedy with no commercials. Not bad at all, even if the iPod has to be recharged every couple of days.

I’ll admit up front that this post will probably only be of interest to a couple of you.

But for the sake of the two or three of you who might find it useful, allow me to take you all back into the past.

Before there was the iPhone, there was the iPod in all its many sizes and shapes. And in those days before streaming, you needed lots of storage to carry all your music with you.

Of course, back in those days, “lots of storage” meant something very different than it does today. We’re talking 2001-2004, and the top of the line iPods had astoundingly large 40GB hard drives.

Yes, actual hard drives, not flash storage. Itty-bitty 1.8-inch drives. Packing that much storage into something that small was expensive. The fourth-generation iPod that came out in 2004 cost $399 for that 40GB model. But you could, in all likelihood, put your entire music collection on that drive.

Fast forward to 2007 and 2008. By then, Apple was moving to the streaming model. They didn’t really want people carrying their collections. They wanted everyone to stream their music from the iTunes store to their spiffy new iPod Touch devices which maxed out at 32GB of flash storage.

Of course, those of us who had big collections didn’t go for that at all, and we jumped on what turned out to be the last generation of non-touch iPods: the iPod Classic with 80GB, 120GB, or 160GB of storage.

Those Classics have served us well, but our collections have grown. And, regrettably, hard drives do fail. A fifteen-year-old drive should rightly be regarded with suspicion.

The result is a bunch of excellent music players gathering dust.

Naturally, this is the point where the Internet and some dedicated hardware hackers step in.

Flash storage is cheap. What if we could replace that 1.8-inch hunk of metal with an SD card? Physically smaller, use less power, read and write faster, and offer capacities well beyond 160GB.

Turns out you can.

It’s a three step process, which I’m going to document here, partly for any of you who have elderly iPod Classics going to waste, and partly to help me remember how to do it, in case I need to repeat the process somewhere down the line.

Step One: Get the necessary hardware. You need a small circuit board to allow you to put an SD card where the hard drive used to be. You also need the SD card or cards.

At this point, I’m going to recommend iFlash. I bought their iFlash Solo*. Total cost, including shipping from the UK, ran me $44. I probably got lucky, but even in the face of world-wide lockdowns, it only took a couple of weeks to get here.

* The Solo, as the name implies, holds a single SD card. Iflash also offers the Duo and the Quad, which allow you to use multiple cards and have them show up on the iPod as a single drive. Handy if you want really awesomely large capacities or want to make use of whatever SD cards you have lying around the house.

Step Two: This is the hardest part. Apple very much does not want you to open your iPod Classic. I failed completely. A friend of mine who repairs computers failed completely. I finally wound up taking the whole pile of parts to a local Mac repair shop. They opened the iPod, swapped the drive for my Solo+512GB microSD card, and reassembled the device. Best $30 I’ve spent all year.

Step Three: At this point, if all you wanted to do was replace a failing hard drive with and SD card, you’re done. Plug the iPod into your computer, let iTunes format it, and you’re all set.

Unfortunately, if you wanted to increase the capacity of the iPod, you’ve got more work to do. Take another look at that picture. “127 GB Free”. What happened to the rest of my 512GB?

Well, back in those long-ago days, operating systems couldn’t easily deal with drives larger than 128GB. There were some tricks available (hence that 160GB iPod Classic), but they were very limited.

So, to take advantage of that new space, you have to replace Apple’s iPod software with something more modern. Like Rockbox. Specifically, Rockbox for the iPod Classic.

Let’s extend our steps a bit.

Step Four: Install Rockbox. It’s easy. Plug in the iPod to your computer, download and run the installer. Whoops, forgot a step.

Step Three Point Five: Rockbox doesn’t recognize the Macintosh disk format. So you need to use iTunes on Windows to format the iPod. Launch iTunes, plug in the iPod, and say “Yes” when iTunes asks if you want to initialize the iPod.

Okay, back to Step Four. You can take the defaults on the installer. Select your iPod and follow the prompts. You will have to reboot the iPod at one point, but don’t worry, the Rockbox installer will tell you when to do it and how.

Once Rockbox is installed, you’ll see this: 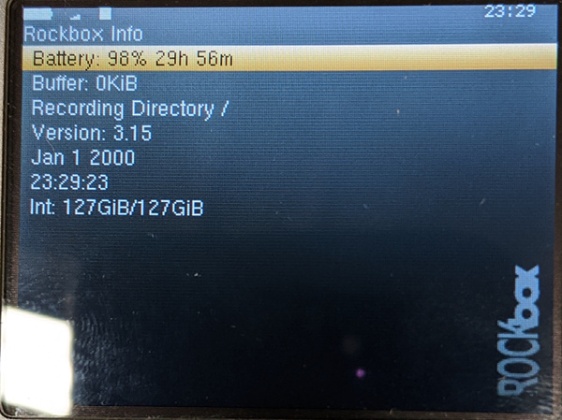 Yup, still only seeing 128GB. That’s because we have to reformat the iPod to use the entire SD card. So, on to

Step Five: This is the tricky bit. The iPod needs to be formatted in FAT32*. Unfortunately, Windows won’t let you format a drive larger than 32GB in FAT32. There are a number of programs that will let you get around that restriction. Google is your friend here. Or use a Mac and choose “Windows (FAT)” as the format.

Don’t worry about what these names mean. They’re just different ways to lay out the data on a drive.

Step Six: Load up your iPod. You’ll find that it is much faster. (Quieter, too.) Which is not to say it’s fast. The connection is still USB2, which puts an upper limit on how quickly your music can be copied. But you can always start the copy and let it run overnight.

That took about twelve hours. But I’ve still got more than a quarter of the SD card free. I figure I shouldn’t need to upgrade the storage for at least another six months.

(Oops. Just realized I forgot to set the iPod’s clock. I’ll go do that now.)