Sachiko has laid claim to the household’s entire stockpile of gooshy fud. 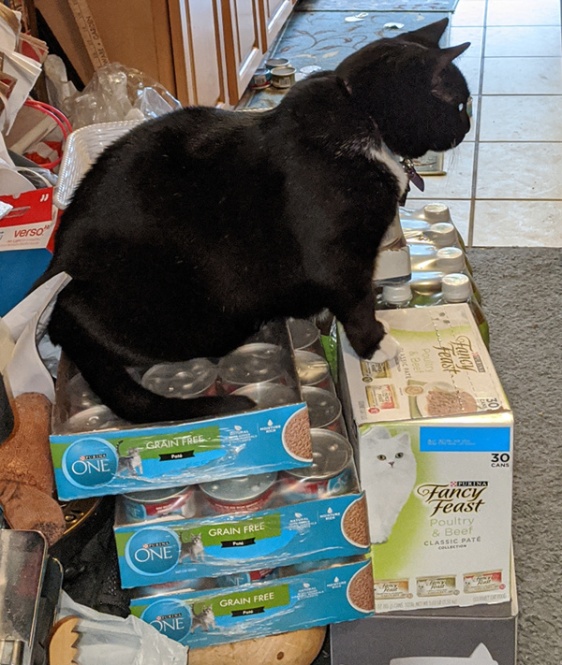 Not only does she have the shared stock of Purina and the Fancy Feast we use when someone is on medication (mixing the drugs into the “Kitty Krack” ensures the patient gets their full dose), but on her far side is Watanuki’s special low-residue gooshy and Sachiko has one haunch firmly planted on that case as well.

If retaining ownership means staying put 24/7, Sachiko is up for it.

In truth, she’s abandoned her hoard a couple of times for visits to the box and–because her hoomins are rude and refuse to put food bowls anywhere but on the floor–to eat. But she solemnly assures us that those minor lapses “don’t count”.

Lefty is continuing to settle in to his new life. He’s increasingly comfortable around the humans–he even occasionally accepts a patting (he especially enjoys having his neck scratched).

It’s obvious he misses Rufus at least as much as we do. He’s trying to fill the void by cuddling up to the other cats, especially Yuki. 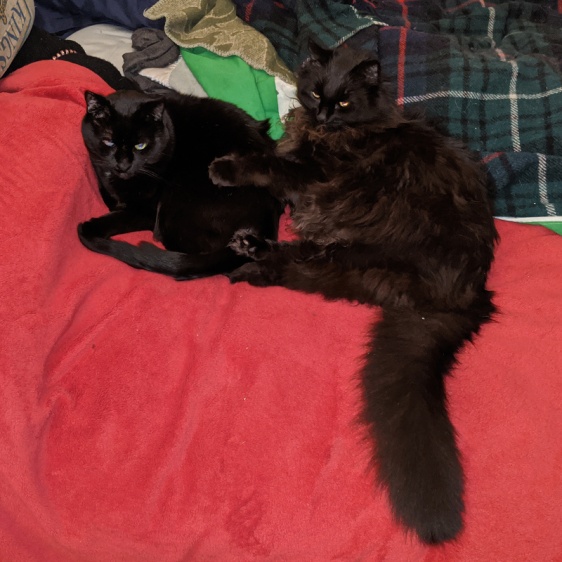 We’re not sure if Yuki is just more tolerant of Lefty’s attentions, or if it’s a case of “black cats stick together”. Yuki has missed spending time with Rhubarb lately, so he may be predisposed to hang out with whoever wants to spend time with him. Or it may just be that his mobility issues make it harder for him to get away when Lefty hits him with a full-body head bump.

Regardless, they are spending a fair amount of time together. Though that pose is a little unusual: Lefty is usually the one wrapping himself around/across Yuki, but there is a lot of mutual grooming and reciprocal pillowing.

He’s got a fascinating chitter when prey appears outside. It sounds mechanical; combined with the way his head and tail twitch, he almost seems like a feline bobblehead.

He hasn’t joined Ooki Brothers Security. It’s clear that ‘Nuki doesn’t yet trust Lefty to keep proper watch, and has been known to chase him away from the window when he comes on duty.

But, surprisingly, they do manage to spend some time in relatively peaceful coexistence. 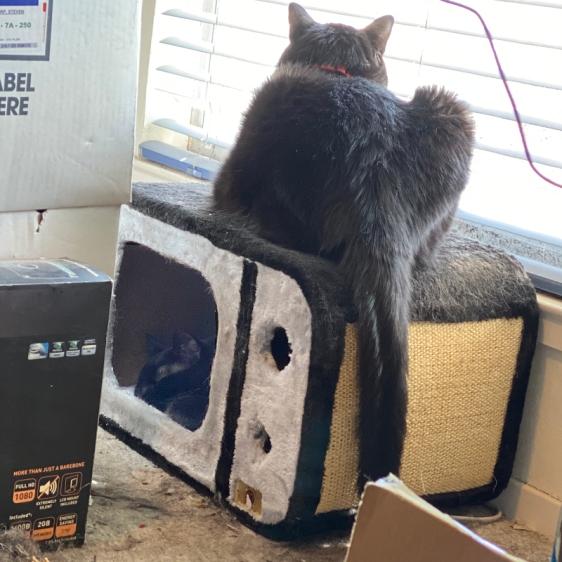 Admittedly, having a barrier between them helps the relationship–and Lefty wasn’t as deeply asleep as this picture suggests.

It’s definite progress, though, and we’re pleased to see it.

Would that they were always so cute together.

While we are allowing the Formerly Feral Fellows more freedom, we do keep the fence up across the stairs for most of the day.

Neither of them has made any effort to jump or climb over it, so we presume they’re not bothered by the restriction. Though they are spending more time hanging around near the top of the stairs.

Rufus especially likes the top of that box. It’s a well-padded place to sleep, with plenty of slightly filtered sunlight from the window over the stairs.

When we take the fence down and let him wander freely, Lefty frequently comes down as far as the main landing. It’s not just the food bowls that catch his attention.

After a few through-the-fence interactions, ‘Nuki seems to have figured out that Lefty is not as easygoing as his mentor. He’s not a fighter, but he will take a swing at anything he thinks might be threatening him.

I don’t think Lefty wants to be an alpha-kitty, but he does seem to believe in keeping his options open.

As a result, we’ve had several near-interactions like this one, with the two settling down on opposite sides of the floor and elaborately ignoring each other.

Of course, it doesn’t harm the developing relationship any that Rufus casually hangs out nearby, keeping an eye on his protege.

A not uncommon sight in recent days.

Lefty likes the upper of the two portable caves (though I suspect he’d be less enamored of it if he knew it could theoretically be moved).

Rufus, meanwhile, quite enjoys the condo in the afternoon. There’s enough sunlight to warm his flanks, and the carpeted surface is soft enough for comfort, but solid enough for support.

But not all is peace and tranquility in the upper hall.

A few minutes after I took the photo above, I heard the sound of minor feline politics.

When I peeked around the corner, I found Lefty sitting on the floor looking somewhat confused, and Rufus firmly in possession of the cave.

While we think of Rufus as a mild-mannered fellow, he doesn’t hesitate to make his wishes known.

However, as soon as Rufus realized I was looking (and getting the camera ready)–

–he came running over to me for some attentions. Clearly, tummy rubs are a higher priority than maintaining ownership of the best cave.

And yes, Lefty did reclaim his turf while Rufus was otherwise occupied.

Despite appearances, Lefty is not actually on trial for his life.

Yes, he is on trial, but that’s just the way Kokoro is with anything or anyone new and different.

Lefty has been making great progress lately. He no longer flees when we approach, though he still retreats. Just much more slowly and not as far. And he will take treats from our hands if we’re patient and let him go at his own pace.

So we’ve started giving him the run of the upstairs hall during the day. That means he’s had a chance to make the acquaintance of almost everyone. He’s only seen Kaja from a distance, and hasn’t gotten closer to ‘Nuki than a couple of feet, with the fence between them.

But he’s had nose-to-nose (and nose-to-butt) meetings with Yuki, Kokoro, and Sachiko without anyone getting violent. As I said, great progress.

It seems Rhubarb has found his calling in life. We’ve often seen him serving as Yuki’s pillow, but now he’s expanded his clientele.

Many are called, few can serve.

It should be noted, however, that Yuki is not at all happy about losing his exclusive snoozing privilege. 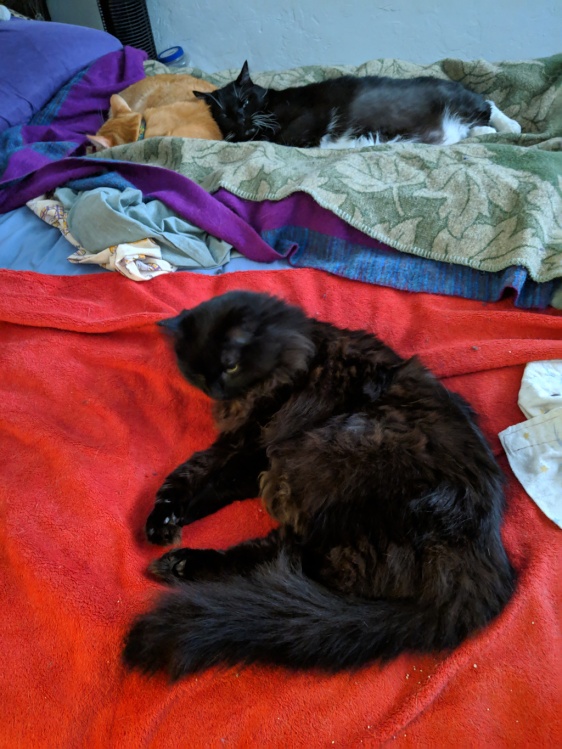 Yes, I know yesterday’s post was a bit dark. For the record, no I’m not particularly depressed. No need to alert Facebook’s algorithms.

And, speaking of records, the Mariners did set that record–15 games at the beginning of the season with at least one home run–they did win yesterday in a very thrilling come-from-behind fashion, and they now return home bearing the best record in baseball and a four game division lead over the Astros. Who are, coincidentally, the team they’ll be playing for the next three days and who, historically speaking, the Mariners have always had trouble beating. As I said before, it can’t last. But it’s a great ride while it does.

Anyway, how about something cheerful as an antidote to yesterday’s doom and gloom?

Hang on, let me enhance that a little. Or at least brighten it up a bit.

Why, look! It’s Lefty, out of the room he shares with Rufus!

Yes, we’ve begun giving him opportunities to explore the upstairs hall. He’s been very cautious about it, not spending much time off his familiar turf, and certainly not letting us close (hence the low resolution of the pictures–they were cropped out of shots taken from halfway across the house).

But he’s taking steps in the right direction. Not only is he broadening his horizons, but he’s also had a couple of opportunities to exchange less-than-flattering personal observations with ‘Nuki.

Now that is a rite of passage!

It’s not often we see these three hanging out together. Enjoy.

I think the video below sums up Rufus’ and Lefty’s relationship.

As a wordsmith, I find it disappointing that no commentary is necessary.

As I’ve noted from time to time, Rhubarb is the perennial undercat around here. Nearly everyone bullies him; the lone exception is Sachiko, who’s treated him with a sort of wary respect ever since she was a kitten. (Which is not to say that there’s no strife between them. Sometimes she just can’t resist a casual claw swipe in his direction. But that’s Sachiko being Sachiko.)

Of late, Rhubarb has been trying to assert himself more. It doesn’t work very well, but it’s nice to see him trying. He just hasn’t figured out that he needs to sustain his effort. One hiss or paw slap to the forehead gets attention, but not the kind of respect he’s looking for.

It’ll come to him eventually, I suspect.

And until then, he’ll be our contemplative smoked-salmon-and-cream-cheese fellow.