You all know what it means when this happens, right?

Parenthetically, this migration was in the works more than a month ago. It got put on hold by Rufus’ departure and an in-house epidemic of feline sneezing. So, please don’t think this is in any way an attempt to fill the Rufus-shaped gap in our lives. (Not that it would work that way. For somebody who didn’t wear clothes, Rufus left behind some very big shoes to fill.)

We’re hoping that Lefty will step at least partly into those metaphorical shoes and pass along some of the lessons he learned from Rufus. With that in mind, we’re not pushing him into full integration with the others: still feeding him separately and shutting him into the room at night; if he and the new arrival bond, it should smooth the transition for both of them.

It probably comes as no surprise to anyone that the new resident is MM*. She’d been obviously bored in isolation out in the catio, and had been neglecting her self-appointed sentry duties. We had to do something, and letting her go wild again still seems like a bad idea–yes, the coyotes are still around.

* Renaming will come later, when we get to know her as an indoor cat.

Her transition is going slowly. Which is fine. We’re not in a hurry, and we can give her as much time as she needs to adjust. For now, she still spends most of her time curled up in either the milk crate:

But she does seem healthy. Her appetite is good

and while she definitely prefers gooshy fud to kitty krunchiez, she doesn’t neglect the later.

She interacts with the other cats–primarily Lefty, since he spends more time in the room than anyone else, even without counting the bedtime lockdown hours.

And she has been exploring her new residence–with, it must be admitted, mixed results.

Check out the upper right hand corner of the screen. That bright light is Lefty watching the show and, no doubt, laughing.

Who’s that curled up all cozy on the mushroom? 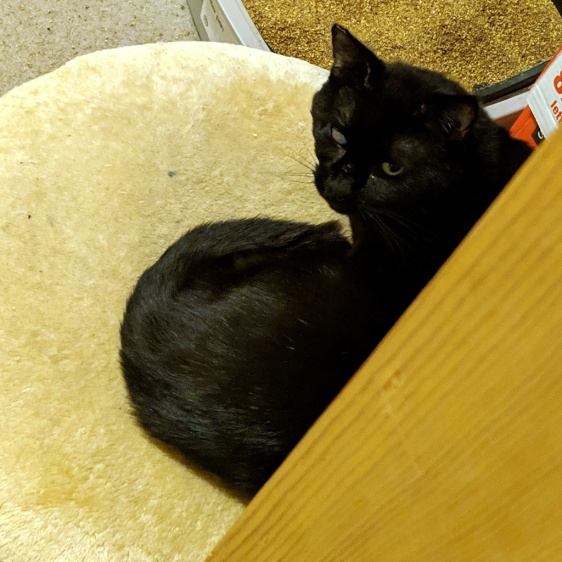 Care to share a few words with your fans, Lefty? 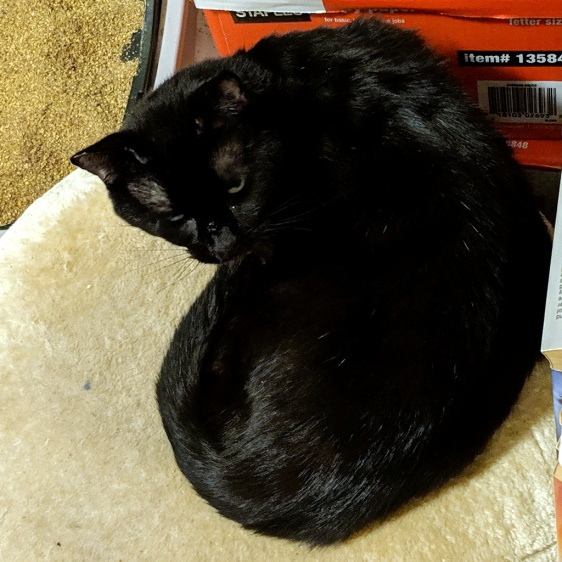 Clearly, he’s got nothing printable to say…

Seriously, though, this is a major step forward. Sure, he was uneasy, not to mention annoyed at being awakened. But nevertheless, he stayed put long enough for me to stick my phone through the barely opened door and take several pictures.

All part of the evolution of his attitude. He still hides under the futon when we come into the room, but he stays much closer to the edge, and he’ll actually come out into the room to get treats.

He’s quite the elegant fellow–though he’s still not happy about being watched–and he’s still keeping a safe distance, even when treats are involved. But his definition of a “safe distance” is getting smaller and smaller.

Perhaps you’ve heard that it’s been a trifle damp around here lately? If you missed it, the drought has been officially declared over, at least in this part of the state.

Such gains don’t come for free, however, and there’s always someone who suffers. In this case, that’s been the outdoor cats.

Mind you, they’ve found ways to stay, if not dry, at least not as soggy as they could have been. There’s a spot near where our furnace vents to the outside that’s partially sheltered from the rain, and both Tuxie and MM hang out there for hours at a stretch. MM also lurks under some dense bushes near the house.

And Tuxie figured out that the Rose Cottage is where it is for a reason. 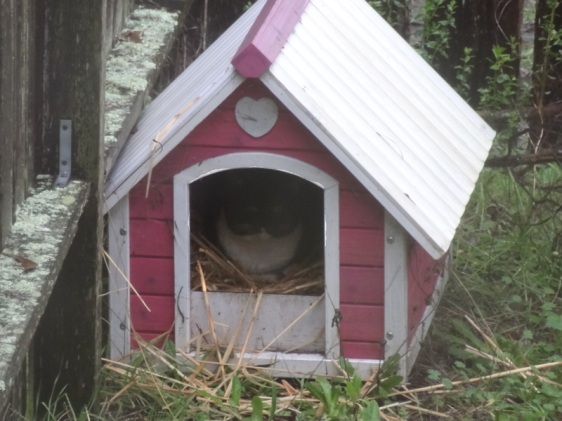 It’s not perfect, but it helps.

Note, though, that I didn’t say anything about L. Rufus Alexander. The catio is thoroughly soaked–

–but that’s not his problem any more.

Y’see, back around Christmas, when temperatures dropped to within spitting distance of freezing, we decided it was time to deal with the politics and move him inside. It took a few days to gather the necessary equipment, but on Friday the thirtieth, he made the move.

We’re taking it slowly; he spent the first week in a cage to let him get accustomed to the new environment. 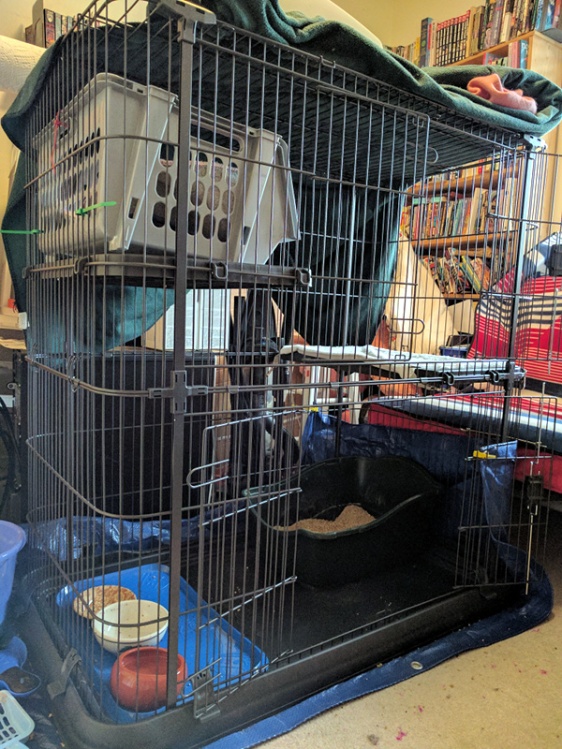 Large, but not anything close to his former palatial quarters. So we were all relieved when Rufus stopped spending the majority of his time curled up in the bed and showed signs of boredom. That sounds worse than it was. In truth, he didn’t spend the entire week in the cage. We gave him a couple of supervised exploration/exercise/cuddling sessions every day. And, to nobody’s surprise, he showed the courtesy and helpfulness that are his hallmarks, never trying to escape, and always returning to the cage at the end of a session–though, to be fair, we occasionally had to encourage him by tapping on his food bowl.

After the first week, we fastened the cage door open and allowed him free rein to do what he wanted. For the first day or so, what he wanted was to sit under the futon or in the cat condo, and keep a wary eye on everything that was going on.

But by the end of that weekend, he had relaxed enough to come out and make a new friend. 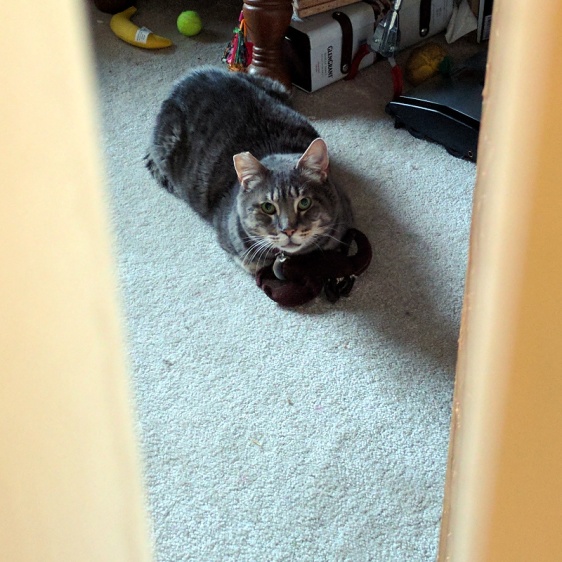 (If that stuffed scorpion looks familiar, it means you’ve been hanging around this blog too long. Yes, that scorpion was Sachiko’s favorite toy when she lived in that room.)

He’s also made friends of the human variety.

The person scratching his ears requested anonymity in order to maintain her reputation. But, reputation or no, Rufus appreciated her visit, and was in top buzzing, chirring form.

Oddly, it took quite some time before Rufus was willing to get up on the futon. Maybe he had a bad experience with a couch in a previous life. Maybe it’s just the way the cover crackles. But he did eventually adjust, and now it’s his favorite snoozing spot. 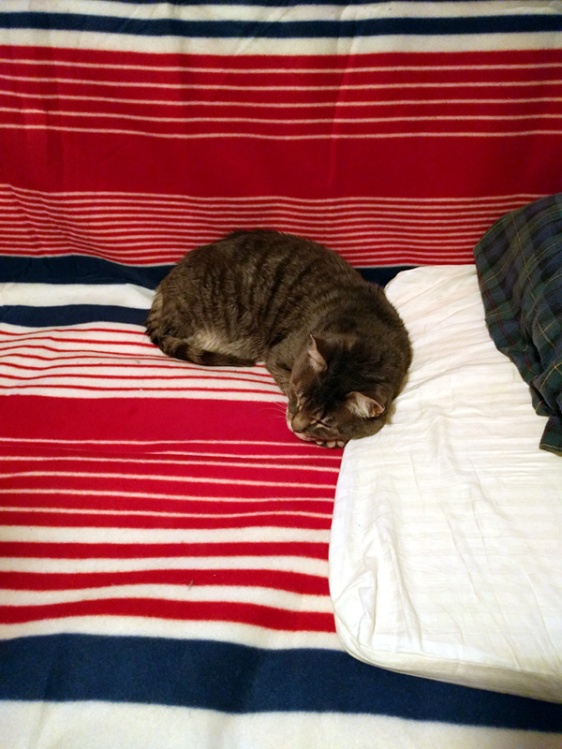 For the last several days, we’ve been leaving the door ajar–albeit on a chain–and he’s been exchanging sniffs with the herd. So far, all of the interactions seem to have been peaceful. Over the weekend, we’ll try more extensive introductions: a shared feeding time with a wire fence in the doorway between Rufus and everybody else.

We’re in no hurry, but the goal is to integrate him into the herd as much as possible, though, because of his special diet, we may need to isolate him at dinner time.

I don’t think he’ll mind returning to his current quarters every night. Aside from the food, the library has an unsecured, Internet-connected computer.

Remember: “On the Internet, nobody knows you’re a cat–but if they figure it out, they’ll worship you.”