Yuki spends nights in the master bathroom. He’s got his own sleeping cave and, from bedtime to wake up time, a private litter box and food bowls.

Even though it’s a daily occurrence, somehow it’s still an event when he appears at the front of his cave. 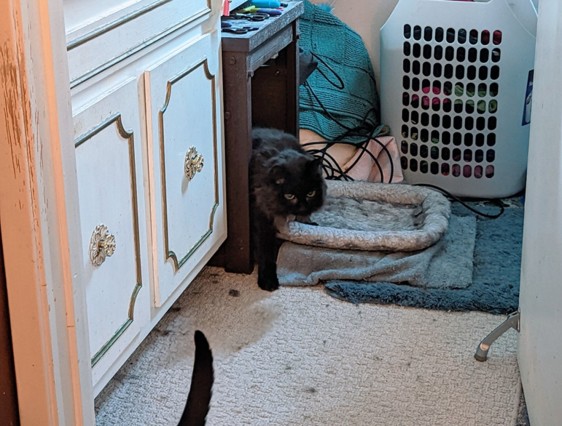 The tail in the foreground is Sachiko’s. She poked her nose in to see what Big Brudder Yukles was up to, and upon discovering he was heading out to start the day, she literally turned tail.

Not that Yuki cares. As long as nobody tries to join him in the cave, he’s content.

Emeraldas’ relationship with Yuki and Lefty is complicated.

I know I’ve said it before, but it bears repeating. To be honest, we’re not sure if she realizes that they’re two separate cats.

It’s an easy mistake to make, I suppose. They are similarly sized and colored. One is floofy and the other isn’t, but maybe Her Majesty isn’t particularly texture-oriented. Whatever the explanation, she does sometimes seem confused when her boys are hanging out together.

But in the normal course of affairs, she’s happy to accept grooming from Yuki.

(I love that paw across the back of her neck. So sweet!)

And she’s just as pleased to be groomed by Lefty.

Not all is sunshine and rainbows, though. Disagreements do arise.

I can neither confirm nor refute rumors that Lefty tasted Yuki’s saliva on Emeraldas’ forehead. But he definitely got a tongue-full of something he didn’t care for–and this is the guy who’ll eat almost anything except feta cheese.

Watanuki can be–often is–an asshole of epic proportions. He’s earned the nickname “Thugbutt” many times over. He’ll slap anyone he thinks isn’t paying him enough attention. Or paying him too much attention. Stealing “his” food*. Sitting in his spot.

* Never mind that the food is served in common bowls.

But then again, when the moon is in the seventh house andstars align, he’ll drift into Friendly Fellow territory.

Snuggles with the panther? Sure, why not? Pose for a picture? Might as well.

The mood swings do keep the bipeds guessing.

But BFFs? No. Sooner or later, the thug always reappears.

While she does sometimes settle down to read the paper with her butt, more often, she’s on the table to decide what to assault next.

“Too much up here, even if I knocks it over. Gotta put more on floor or Grabity not cut me slack. Dat salt grinder easy target…”

OK, for those of you with sensitivity to spiders, stop here.

For the rest of you, scroll down a little further for one more shot of our new neighbor. I love how this one turned out with the light behind her web. 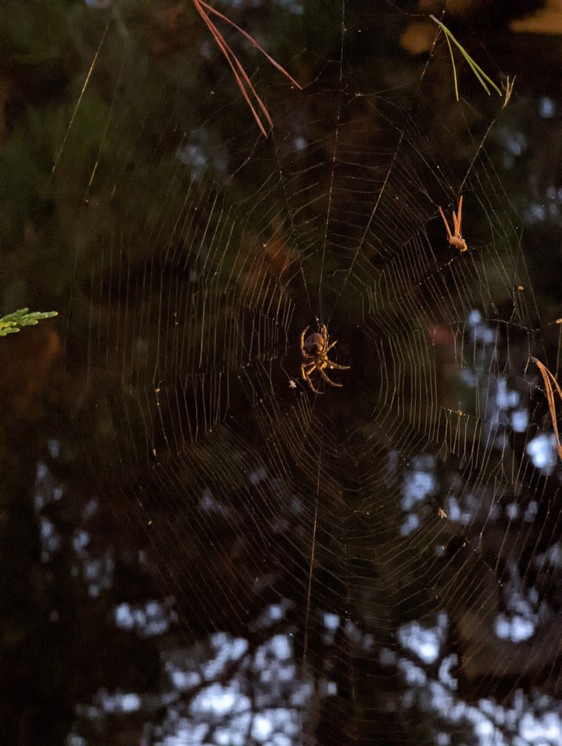 While Kokoro, Sachiko, and Emeraldas are occasionally found chilling on the bed, most often it’s the boys’ hangout.

Every so often, though, there’s an interloper.

The nameless stuffed black cat usually serves as Maggie’s back rest, but sometimes sprawls at the foot of the bed.

The boys don’t seem to mind. Maybe because the stuffed cat fits with their color scheme?

We all have our crosses to bear.

Mine is that I’m decidedly not a morning person. Doesn’t matter how much sleep I get, I just don’t function at peak capacity until afternoon (and aftercaffeination).

So you might think that I’m distinctly unfond of opening my eyes to see, well, this: 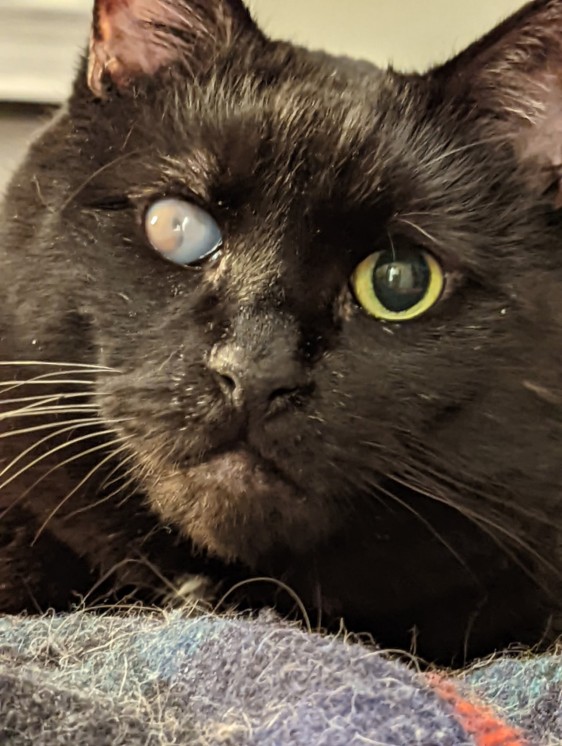 After all, for most cats this would be the “It’s morning and I want my breakfast” greeting.

Lefty is not most cats.

This is his “Don’t get up. Take five more minutes* to give me snuggles before you crawl out of bed—and feel free to keep your eyes closed if it makes the day easier” greeting.

* Or five more hours. Whatever works for you.

Thank all the greater and lesser gods and goddesses for our SnugglePanther.

A couple of weeks ago, I promised to share video of Mr. Knuckles at the Kitteh Partay.

Never let it be said that I reneged on a promise.

He’s not the most graceful dancer you’ve ever seen–but let’s be fair: he does have two left feet.

As for his repeated drops, this was an unusually clumsy day. Typically he’s more likely to swallow somebody’s finger along with the treat.

Yuki, Emeraldas, and Lefty have an interesting relationship.

Or, I suppose, set of relationships.

As best we can tell, Em is madly in love with Yuki, taking every opportunity to snuggle up, groom him and be groomed by him. Yuki seems to enjoy the attention–except when she gets too vigorous and knocks him over (he’s not very stable on his feet)–but doesn’t go out of his way to spend time with her.

Her Majesty also spends much of her time with Lefty. There’s far less grooming, mutual or otherwise, but significant amounts of quiet chilling, especially in the late evening when they share my chair in the dining room.

As for the boys, they’ll snuggle up and indulge in a bit of mutual grooming, but there’s a definite air of making do, especially as they only occasionally do it when Emeraldas is around.

No question, Em is the hinge pin in the scissor of their triad.

Or maybe that’s the wrong metaphor. Never mind, it’s late and so is the post. I’ll go with it.

And close with a shot of Yuki, showing just how he feels about her grooming efforts.

[This post went live at 11:59. That makes it a Friday post, rather than a Saturday one, right?]

Just a quiet moment as Queen Emeraldas and her loyal consort Lefty watch the world go by from their observation post on the landing.

Yes, those are my legs she’s curled up between.

We’re not entirely sure she recognizes legs and feet as being part of reclining bipeds. And she definitely didn’t jump up on the bed to hang out with me.

She’s been showing up in the late evening recently, hopping up on the bed to snuggle with Yuki. Interestingly, she’s allowing him to wash her ears, which is often a submissive signal. It’s hard to picture Em as submissive with anyone, but there it is.

Anyway, on this particular day, Yuki happened to be sprawled between my knees, so Em had no real choice but to curl up where she did.

Every time I so much as twitched, she looked up in alarm, so I wound up holding as still as I could for about half an hour. Naturally, my legs went to sleep, so I did eventually have to restore circulation by moving. At which point, she leapt off the bed and sulked on the floor.

But the truly wonderful thing is that she apparently decided the bed is a comfy place to hang out, even when Mr. Floof isn’t present.

Witness the scene a few days later when I went into the bedroom:

Rather than disturbing her more than I already had by taking the picture, I decided to read elsewhere.