Today’s a housekeeping day. The dishes are in the dishwasher, there are clothes in the dryer, and we’re collecting estimates to replace our fence.

No, seriously. I know it’s hard to believe, but we actually do dishes occasionally and–what? Oh, yeah, that. Really:

So, that being the case, I might as well do a little electronic housekeeping and clear out the pile of stuff that’s been piling up because they’re not even long enough for a Short Attention Span Theater post.

But first, this commercial message:

On Sunday, I’ll be at Borderlands Books in San Francisco, pushing The RagTime Traveler. The plan is to cover the history of ragtime music and the history of TRTT before I sign copies. That’s darn ambitious for an hour, so if you’re into train wrecks, come watch this one develop!

I’ve griped about greengrocers’ apostrophes before (customer’s what?), so I’ll just note that this is the first time I’ve seen single quotes used instead of double for those darn useless quotes. But why didn’t they put quotes around “customer’s” and “manager”? 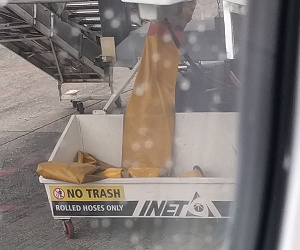 In the “you only had one job” category. If that qualifies as a rolled hose, I really want to look inside the bin and see how many scraps of paper, broken tools, and rotting vegetables qualify as not trash.

Back to grammar. The way I read this, it’s perfectly fine for me to play with the condiments for sanitation purposes. My kids will just have to watch. Or I can let them play with the condiments as long as it has nothing to do with sanitation. Hey, kids, how high can you stack the creamers? No, Billy, you can’t clean the spilled jelly off that container; that would be sanitary!

Lawyers have a strange view of what is necessary and appropriate.

Case in point: a few years ago, our local hospital closed. That’s a whole rant of its own, so I’ll spare you for now. But unwinding its affairs has been a protracted affair.

Earlier this week, both Maggie and I got letters from a law firm representing our county healthcare district informing us that the hospital’s patient records will be destroyed in a few months.

Frankly, that seems like a good idea to me, especially since they’re providing a way for former patients to claim their records if they need them for their new doctors.

Let that sink in for a moment.

They consider it appropriate to send these letters to insurers who might have had clients who were treated at the hospital. OK, so there are no names on the letter; it’s not a privacy violation. But where the heck did they get the names of those companies “believed” to have served former patients? If they were listed in the hospital records, shouldn’t they be considered “known” rather than “believed”? Or did they just send one to every insurance company they could find a name and address for?

The real kicker for me, though, is that this law firm apparently believes there’s a one in four chance that I’m the state attorney general.

Really, guys, it wouldn’t have cost that much more to send a separate letter to the AG? Heck, the savings in ink from not printing Item Four on those millions of letters would more than outweigh the cost of some clerk’s time.

I indicated last week that I was willing to risk the fall of civilization by accepting the modern usage of “literally” to mean “not literally”. The risk is small. If I were doing QA on the use of the English language as a means of destroying civilization, and time or budgetary constraints forced a reduction in test scope, that would be among the first tests to be omitted.

But there’s another trend in English usage that’s of much greater risk. That’s the greengrocers’ apostrophe, and I am not going to compromise on that! Get your plurals correct or risk my wrath!

“Oh, come on,” I hear you say. “Is there really such a big risk in a few extra apostrophe’s? What doe’s it matter if I add an apostrophe in writing plural’s?”

To which I reply “AAAAAAAAaaaaaaaaargh!!!!!”

Yes, there is a risk. Not only are you wasting time, effort, and ink, but you are also decreasing your readers’ ability to understand you.

The rules for making a word plural are simple:

Watch out for irregular words, though. Some words use non-standard plural forms (one mouse, two mice) or the same word for both singular and plural (one deer, two deer). It’s amazing how few people will notice if you slip up, as long as you use the correct standard form, so be careful.

The rules here are also simple:

“Free of the bananas” makes no sense, so not “the banana’s free” (or worse yet, “free banana’s”)

And it matters. Consider these possible newspaper headlines:

The first tells us that one of the bolts on the bridge has had a break. We’ll have to read the article to find out whether the bolt has snapped or won the lottery, but either way, it’s only one bolt.

The second tells us that whatever happened, it happened to more than one bolt. I don’t know about you, but if I’m going to be driving across the bridge, I want to know how many of the bolts have retired to Hawaii.

So now you know the rules and you have no excuse for misusing your apostrophes. Henceforth, violators will be sentenced to hang by their ears’.