Lefty and Rhubarb, for example. They rarely fight–both are generally mellow fellows–but neither do they seek out each other’s company.

And yet, sometimes they find themselves thrown together by circumstances. 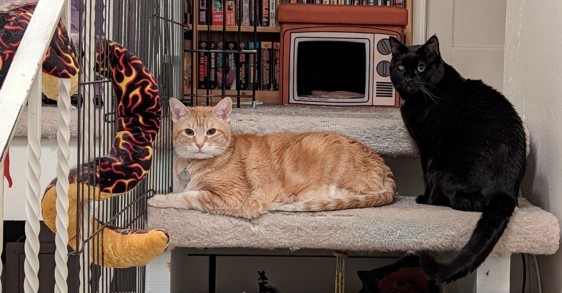 Circumstances such as “This stair has the best view in the house.”

It was an amicable meeting, and lasted about five minutes before they were both called away on urgent business elsewhere, Rhubarb to check his food bowl and Lefty to collect some lap time.

Other pairings are longer term.

(Ignore that thuggish photobomber in the background.)

Emeraldas and Lefty are frequently found in proximity.

Unsurprising, really. They started along the path to Indoor Cathood together–though Lefty made the transition indoors well before Em–and neither is entirely convinced they’ve been fixed.

Like many couples, they bicker: who gets to sit on which chair in the dining room, who gets first dibs on the gooshy fud, or who is going to wash who’s ears first.

Nevertheless, they’re more often found together than apart, and intertwined tails are not uncommon.

One thought on “Pairings”