Some legacies are solider than others.

I got a lot of things from my father. The need to write is all him. My love of baseball, reading, and music are partly from him (though my sense of rhythm is definitely from the other side of the family.)

Then there are more tangible things. I’ve got a box of notepads harvested from his desks*. A pile of flash drives, several outdated but still useful computers, and the collected writings of H. Allen Smith.

* Dad was and I am a hoarder. I look at my mother’s ability to throw out a magazine after she reads it with awe: my default is to save it in case I need it for something. 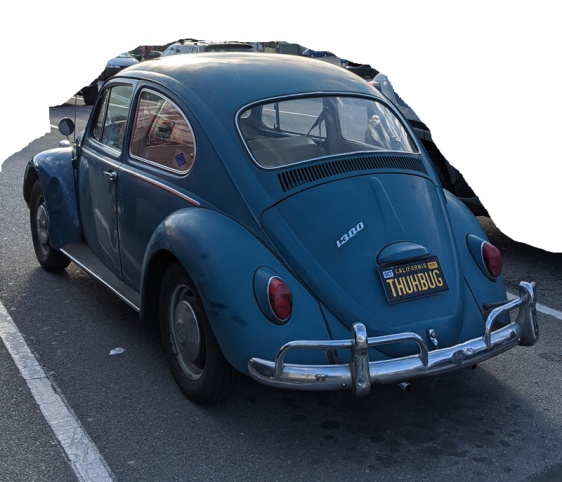 We didn’t get The Bug new; if memory serves, it was about ten years old when it joined the family. And it was and is a family member. The default car when we were going anywhere. The car my sister and I learned to drive in. In later years, through one of those magical shifts of perception, it became Dad’s Car.

And when Dad died, there really wasn’t any question that The Bug was going to stay in the family.

My mother and sister didn’t need it. Nor, really, did I, but I certainly had more use for it than they did. And we all agreed that it was not going to be sold.

Maggie and I spent an eon or so clearing out enough of the garage to make space for The Bug. Maybe not quite that long, though it certainly felt that way–but on the other hand, there’s still more cleaning to do out there so we can use the garage for more than just parking cars.

But The Bug is here and has a place to stay, safe from assaults by the weather, the local wildlife, and neighbors who don’t believe in speed limits.

There have been some changes. 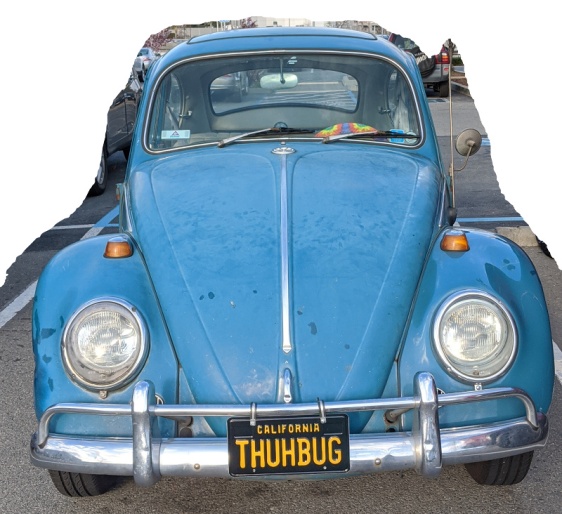 The steering wheel cover is new. The wheel gets amazingly hot in summer; I still don’t understand why Dad didn’t have a cover. “Not part of the original look,” is my best guess.

And, of course, the plates are new. I don’t think Dad would have entirely approved of them. On one hand, I’m sure he would have found the classic yellow on black style much more appropriate than modern plates. On the other hand, personalized plates were never his scene and misspelled words annoyed him as much as a misused apostrophe bugs me.

Some things aren’t going to change. The Bug’s radio doesn’t work. Rather than get it fixed or replaced, Dad just kept a battery powered speaker and a portable CD player–later replaced with his MP3 player–in the car. I’ve upgraded the speaker to a Bluetooth model so I can play music and ballgames from my phone, but the concept is the same. (Dad’s MP3 player–still loaded with ragtime music–and speaker are on my desk as I write this.)

There are still no seatbelts for backseat passengers, nor will there be. I may eventually get the more prominent dents removed, but I’m in no hurry to do so. I’m not planning to remove any of the outdated parking stickers from the windows–though I’ll probably add a few decorative stickers or magnets. Eventually.

Yes, of course I drive The Bug. Manual transmission and all–that’s one of those bicycle skills, the kind you never forget. My cow-orkers have been insanely jealous since the first time I parked it in the lot. They haven’t seen the new plates yet–they just arrived last week–but when they do, I expect a sharp rise in the number of threats to steal it.

Nor are customers immune to The Bug’s charm. I found this under the windshield wiper recently.

Dad would have approved.