Where are they now? Probably in Los Angeles preparing for Friday’s show and album release. (Side note to my friends and family in Seattle: I gather there are still tickets available for Wednesday the 16th.)

Oh. Sorry, BABYMETAL, naturally. Though I suppose I shouldn’t be surprised if you didn’t figure that out. It has been quite a while since I said anything about them. In fact, now that I check the archives, I see the last substantive post was a smidge over three years ago. (The TV show under discussion at the time doesn’t seem to have materialized. This is not a surprise.)

Anyway, I haven’t said anything, not because there’s been no news, but because the news has been largely depressing. In short–and if you want a fuller view of the story, the Wikipedia writeup isn’t bad–Yuimetal has left the group. The official reasons are health concerns and a desire to pursue a solo career. Of course, in light of the secretive and cutthroat nature of the idol industry, speculation is rife about whether she jumped, fell, or was pushed.

I’m not going to indulge. I talked about potential lineup changes back in 2016, when Metal Resistance came out. Nothing that’s happened since then has changed my opinions.

The new album, Metal Galaxy, will be out in a few days. The tracks they’ve released so far sound good. I’m delighted to hear BABYMETAL’s sound continuing to evolve. Doing the same thing over and over can be a financial boon, but it’s almost always an artistic failure. In particular, “Shanti Shanti Shanti” is a literal trip: Bollywood meets the psychadelic sixties. The full video is, naturally, on YouTube, but here’s a snippet from last week’s San Francisco show:

Yes, of course Maggie and I went. Armed with a new camera that doesn’t have the issues my old one did with the super-saturated reds and blues of a BABYMETAL show. So yes, there are pictures.

There was an opening act. Maggie quite enjoyed them, but Avatar isn’t my cup of fur. I do give them kudos for one thing that elevates them above your average consciously pompous metal band:

What better way to poke fun at your own image than with a trombone?

Rather than rework all their choreography for two performers, Yui’s slot has been filled with a rotating cast of performers. Last week, it was Riho, doing a fine job.

As usual, reds and blues dominated the color scheme.

Yes, the new camera does have a darn good zoom for a cheap point-and-shoot. 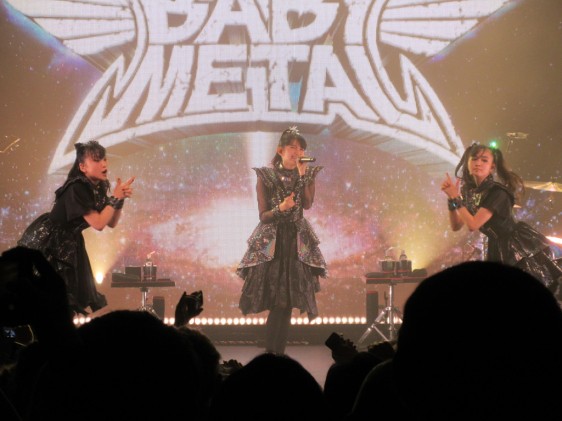 Though, to be fair, I was in an excellent position, directly behind the mixing boards, so I didn’t have to crank the zoom to maximum very often.

I had fun trying to get a Moa hair shot. This one, while not perfect, is certainly the most entertaining.

It’s easy to get a good shot of Su, given how much of the choreography revolves around her, while she stays comparatively still. (Cult of personality? Nah.)

Riho was tougher, but she slowed down occasionally.

All in all, a good show and a good omen for BABYMETAL’s future. 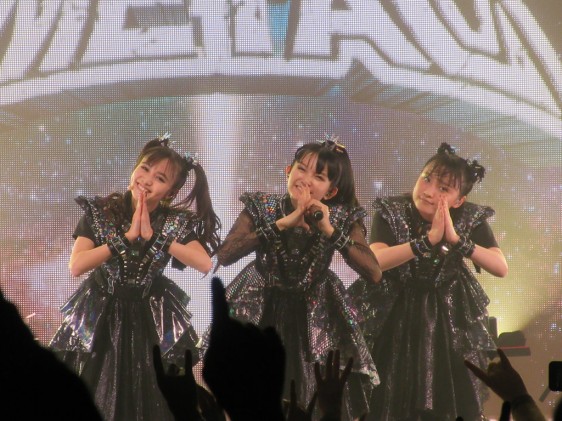