Contrary to what you might have thought after watching last week’s video, Lefty and Rufus actually get along well most of the time.

Even dinnertime is generally peaceful, now that they’ve arrived at a regular routine. Granted, the routine is “Rufus chows down on Lefty’s gooshy food,” but as long as they’re okay with it, we’re not going to interfere.

Oddly, Rufus seems to prefer Lefty’s gooshy to his own, but much as he loves his own krunchiez, he rarely touches Lefty’s. To be perfectly clear, they both get the same dry food, and the only difference between the wet food bowls is a little added water in Rufus’.

Despite the occasional spat, they hang out together and watch out for each other. Rufus guards Lefty when the horrible cat-eating monster (i.e. the vacuum cleaner) visits. In return, Lefty keeps an eye out when they’re sleeping. 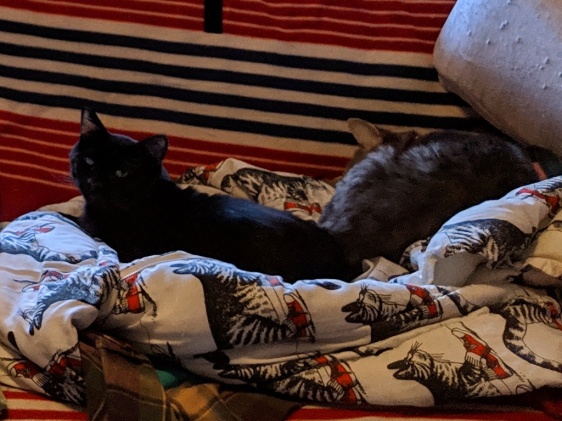 Have you ever seen a better example of “Mess with my buddy and I’ll mess you up”?