Lefty and MM remain in their separate quarters. Though neither is particularly accepting of our presence, we think Lefty may be starting to accept the idea that this indoor living gig might be worth considering.

Yes, there are a lot of conditionals in that sentence, aren’t there?

In any case, he still spends most of his time in his Fortress of Solitude, a carrier secured to one wall of his cage. But he seems slightly more relaxed when we’re around. He no longer glares at us, but eyes us speculatively. 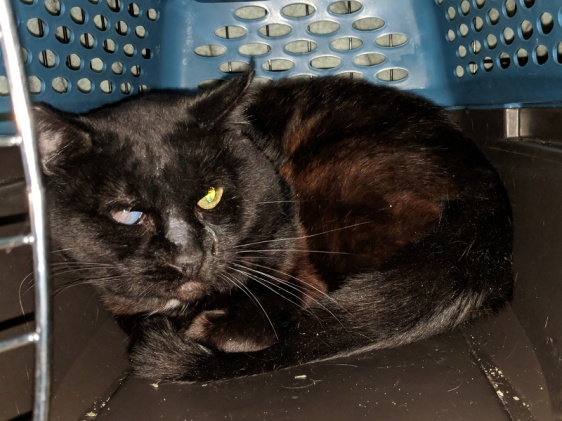 And, as you can see, his face is looking much, much better. His forehead seems to be healed up and the fur is largely regrown. The bridge of his nose is still furless, but then, that’s where he took the most severe damage, so taking longer to grow back–if it grows back at all–isn’t surprising.

Note the lovely red tones in his fur. Tuxie, you may recall, showed similar shading, especially when he pulled his color-changing trick. Makes me wonder if the two of them aren’t related in some fashion. Though that’s purely speculation, I hasten to add.

In any case, Lefty does emerge from his fortress for more than eating and using the box.

Note the quick glimpse of his turbo button.

He does love both the gooshy food (middle bowl) and the krunchiez (near bowl). And, unlike Rufus, he does drink, so we don’t have to mix his gooshy with water.

He seems to like the camera. We’ve got a fair amount of footage of him leaning up against the bars where it’s mounted. My guess is that he likes the feel of the infrared lights on his flank.

Yes, the camera does do IR, which is nice, since we can keep tabs on Lefty at night, when he’s most likely to be out and about, without leaving the garage light on. Though it does mean sacrificing color. A fair exchange.

We gave him the ball toy last weekend, and he completely ignored it until Wednesday, when that second video was captured. He’s rather more interested in the catnip lemon.

And he was very, very enthusiastic about the loose catnip we gave him Tuesday evening. I suspect he was stoned on the ‘nip when he played with the ball toy later that night; it does lower inhibitions.

We’d never try to bribe him into domestication with drugs, of course. (nudge, nudge, wink, wink)

But it’s worth noting that we noticed his attitude change on Wednesday.

5 thoughts on “Settling In”