By and large, we’ve given up on promoting feline friendships. If we can manage peaceful coexistence, we figure that’s good enough.

Although, to be honest, “peaceful” is a word capable of displaying endless gradations. Rufus is much more relaxed around Kokoro than she is around him. But they usually average out to “wary acceptance”. That’s close enough.

Sachiko alternates between “I finks I opposta hiss nao” and “Oh, it you again. Okays.” Either way, Rufus usually lands on “cautious ignoring.” But then, that’s pretty good, considering he’s used to black and white cats–Tuxie and Watanuki–who are in his weight class and far more aggressive than he is. 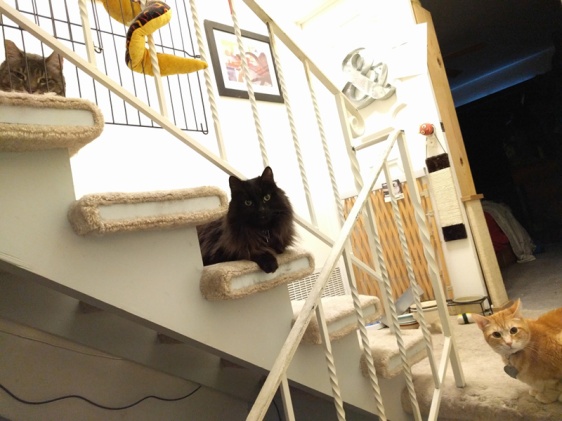 When Yuki and Rhubarb aren’t feuding, they’re the best of buddies. And they’ve both developed a policy of mutual neutrality toward Rufus. “You don’t hit me, I won’t hit you.” And Rufus is fine with that.