Greetings from the San Francisco Bay Area, where the temperature is no longer into three digits.

Yeah, we had the hottest Labor Day weekend on record this year–several cities around the Bay had all-time highs, more had high-for-the-date days. The gods were punishing the Bay Area for something I did.

Well, maybe I’m overly self-centered. It might have been something Maggie did. “But how,” I hear you ask, “do you know it was your fault?”

Simple: Our air conditioner broke. We’re not sure exactly when, but it was either Friday evening or Saturday, when the heat was at its worst. Big thanks to our HVAC company for having somebody working Monday and for keeping their holiday service surcharge to a reasonable level. Of course, by Monday, temperatures were back down to normal levels–but we still had to run the AC for a couple of ours to get the temperature indoors down to normal.

Of course, the problem with this sort of punishment–smiting everyone in the area over the sin of one person–is that the gods never drop you an email to tell you what it was you did wrong. Which means you’re doomed to make the same mistake over and over again. So if you hear that the state of California has finally fallen into the Pacific Ocean, you’ll know whose fault it is.

So it wasn’t quite a restful a holiday as we might have hoped, but it wasn’t an entirely unmixed curse. Rufus, no fool he, spent most of the weekend in the master bathroom, one of the few rooms in the house with an uncarpeted floor. Not only is that new territory for him, it meant he had to interact with the other cats more than usual. As a result, this morning has been unusually free of feline drama.

Meanwhile, the Oakland As were so happy to not be playing in the heat here, that they kindly lost all three of their games in Seattle. Of course, once they left Seattle, Houston moved in. And it seems that floods don’t induce the same sort of friendly attitude. Can’t have it all, I guess.

And, on a more personal note, I discovered a new taste treat. 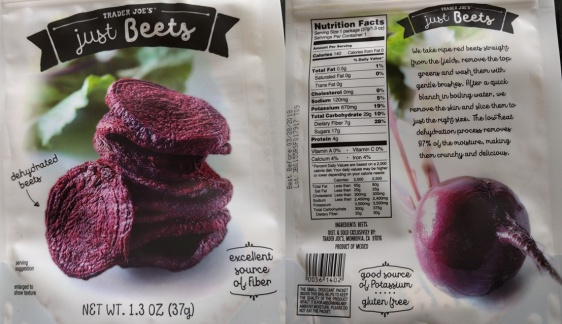 Yeah, I know. About four-fifths of you are making gagging noises. I’m well aware that beets aren’t a popular food item. I’m fairly sure they remain in salad bars almost entirely through inertia–and vendors not wanting to spend the money to retool their production lines.

But for those of us who appreciate a good beet, Trader Joe’s offering is rather compelling.

The beet flavor is present, but not so strong as to be overwhelming. The texture is similar to a thick-cut potato chip, crunchy on the outside and a little chewy in the center.

And check that ingredient list! How can I resist a single-ingredient food? No salt, no preservatives, just pure beety goodness. Yeah, there’s some natural sodium, and a lot of potassium–though that may be a good thing for some–but they’re low fat and cholesterol-free. Even better, unlike most prepared foods, the stated portion size is generous. Trader Joe considers these to be single-serving containers, but I got two quite adequate snacks out of the package. And they’re clearly somewhat dubious about their own recommendation, as they included a zipper seal on the package.

Two tasty snacks for three bucks? That’s a darn sight cheaper and healthier than the vending machine. Even if you’re not normally a beet fancier, you ought to give these a try. You might just be converted.

4 thoughts on “Beeting the Heat”