Did you know that rabbits are susceptible to Maru’s Syndrome? 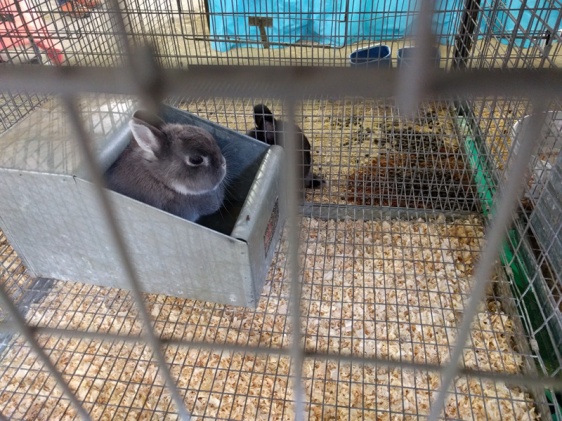 “If it fits, I sits,” indeed. There were several bunnies at the county fair who had more extreme cases of the disease, but this one was the cutest.

Speaking of boxes, I went to clean the litter boxes a few days ago and discovered that someone had left a message.

That’s not a casual comment or accident. The scoop normally lies on the artificial grass mat visible at the lower left. Whoever it was had to pick it up and carry it into the box.

And no, I don’t think the message was that the box needed cleaning. Despite what it looks like in this picture, it actually had less mess in it than usual.

Nor has the message been repeated. Maybe it was just “I’m bored and this looks like a toy.”

I don’t know who left the message either, but odds are good that it was one of these guys.

They may look cute and innocent when they’re curled up on the bed together, but I’m fairly sure that the more innocent they look, the more likely they are to be plotting some fresh deviltry.

And, speaking of deviltry, Sachiko wanted to know when I was going to put her on the blog again.

Never let it be said that I gave her an excuse to bury the litter box scoop. Not that she’d need an excuse if she thought of it.