I say “more or less” because we decided to give him a couple of extra days in the resort. It wasn’t that big a deal. Tuxie was an easy guest, unlike MM when she had her surgery. Not quite as mellow as GT/Rufus, perhaps, but then, nobody is.

The weather was hot after his operation. A couple of days toward the beginning of the week set or came close to setting high temperature records.

Didn’t faze Tuxie a bit. He spent most of the days sprawled on the cool foam pads. 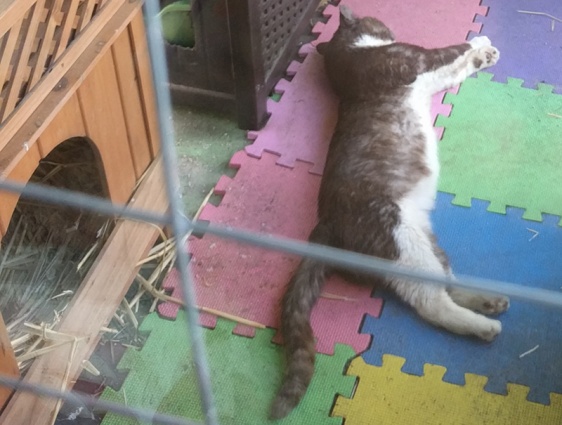 He was much more active after dark.

Hang on, let me give you a closer look. 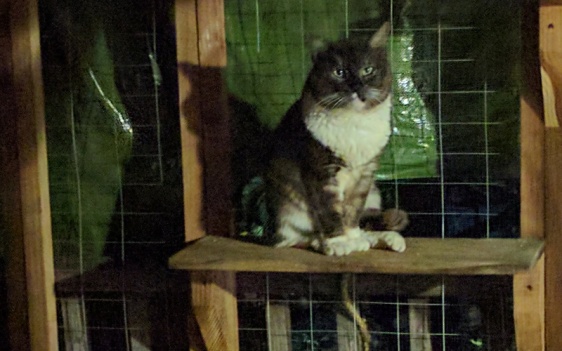 I think he was meditating, though I wouldn’t swear to that.

By the way, note the odd position of his left hind leg. That’s not a side effect of the surgery. He’s sat like that for years. It seems to be a neighborhood thing; we’ve seen Rufus and MM sitting with a similarly-extended leg as well.

MM couldn’t wait to leave. Tuxie was in rather less of a hurry. He strolled out of the catio and buried his nose in the bowl of food we had put out for him. When he finished eating, he moseyed his way down the desk stairs, sauntered across the yard, and ambled off on his rounds.

Nor has he been unsettled at dinner time.

MM is always in a hurry to make sure I fill the bowls. Tuxie figures I’ll get it done eventually, and there will be plenty of time for him to get on his feet–and he’s right.