“Separate but equal” is not an acceptable option.

Accordingly, we’ve been continuing to introduce Rufus to the rest of the gang with increasing levels of interaction and self-guided exploration.

Thursday evening, we opened the door to Rufus’ space*, and then sat back to watch what happened and intercede if the political negotiations got out of paw.

* Which is also the space where Sachiko lived until she was sufficiently socialized to join the “big kitties”. As such, she takes a certain proprietary interest in that room.

Rufus spent a few minutes sniffing around the bathroom. 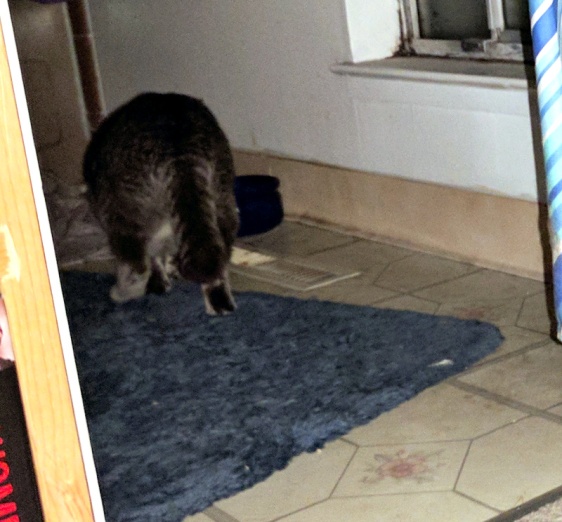 Not finding much to interest him, he headed down the hall in the other direction. Kokoro, ‘Nuki, and Yuki were much more interesting than the bathroom. 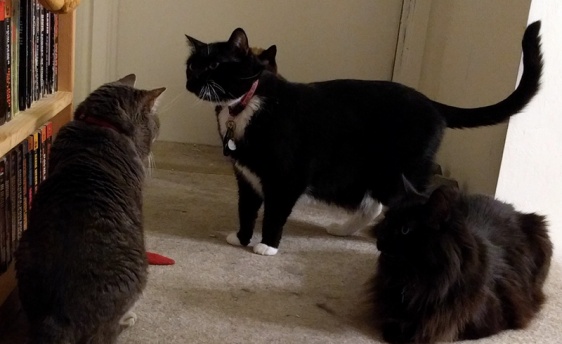 And, of course, they found Rufus quite intriguing as well.

Approximately three seconds after that picture was taken, ‘Nuki and Rufus exchanged a few paw swats, none of which made contact.

Discretion being the better part, Rufus returned to his room, to discover that somebody had taken advantage of his absence to explore. 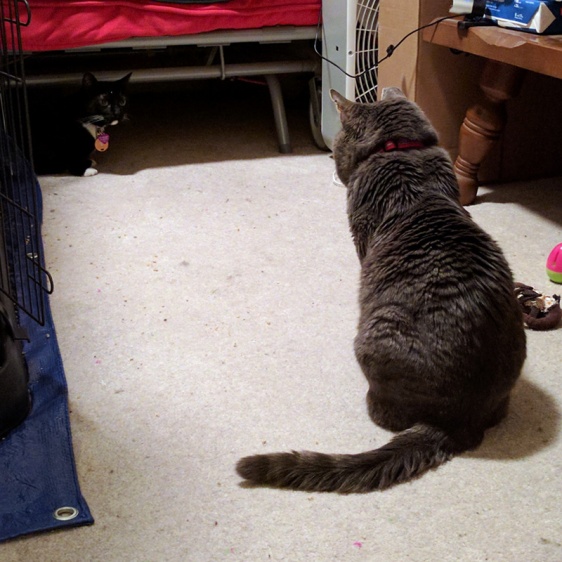 As you can see, Rufus wasn’t amused. He returned to the hall, sending Yuki into a precipitous retreat–so naturally Kokoro and Sachiko took advantage of his absence to explore.

When he came back, Kokoro made a successful escape, but Sachiko panicked, and tried to hide under the futon. She realized it was a mistake almost as soon as she stopped moving, but she couldn’t bring herself to leave past Rufus. Nor could we lure her out–even her favorite treat–licking the fork that we mix Rufus’ food with–couldn’t tempt her out.

The poor Skittercritter stayed under the futon, growling at nothing (or perhaps herself) until we gave Rufus his dinner. As soon as Sachiko realized he was distracted, she hurled herself across the room, out the door, and down the stairs at the end of the hall. She didn’t quite crack the sound barrier, but I think she exceeded the freeway speed limit.

That was all more excitement than we had planned for one day. So the next few days we’ll step back and limit interactions to what they can do through a just-barely-ajar door.

Once everyone’s chilled out, we’ll let them mingle again.