Sure, I’ve known The RagTime Traveler was going to be published since October, but I’m starting to feel it in my gut. Because–well, remember last month’s post about all the steps that have to happen before a book can reach the shelves? Since that post went up, we’ve passed several of the biggest milestones.

First, Poisoned Pen Press, the publisher, finalized the cover art, and it is, IMNSHO, beautiful. Eye-catching without being garish, conveying something of the spirit of the book, and–oh, heck, see for yourself:

Nice, ain’t it? Seeing that started to convince me that TRTT was really going to be published.

Then there are the proofs. Remember I said there was a final review and revision after the ARC was produced? That’s done using the proofs: a typeset copy of the manuscript. In essence, an electronic ARC. I’m going through the document line by line looking for those elusive typos and typesetter slip-ups.

Are there any? Yup. But so far nothing as head-slappingly distressing as the error that snuck into one of Dad’s books. (It’s worth noting that we made use of the same quote in TRTT. Fortunately, it looks like it’s made it through the edits intact. So far. Given Dad’s experience, I’ll be checking the final books…)

Working on the proofs has pushed me further toward belief. But the real convincer? The ARCs. They’re out there. People are reading them. And a couple of days after Christmas, a box showed up on my doorstep. That’s not unusual. What was unusual was that we didn’t recognize the return address. Inside, this: 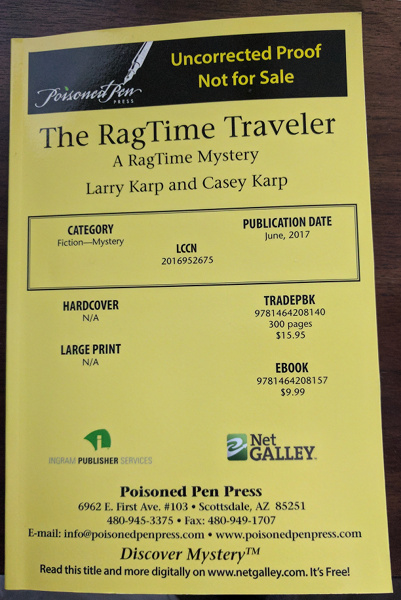 Holding that book–that physical object–was the final push into belief.

So thank you to Poisoned Pen Press for that belated Christmas present. And thank all of you who have pre-ordered The RagTime Traveler.

As for those of you who haven’t put in a pre-order, take a look here. All the information you need is there.

OK, maybe not. I’ll add reviews when they start appearing, and if I really need to twist your arms, once the final-final text is set–once the proofs are edited and the corrections confirmed–I’ll add a sample chapter.

Look, don’t make me come to your houses and beg you to buy my book. None of us want that.

9 thoughts on “The RagTime Traveler Is Real”