Most of the time, the crew does nothing to dispel the popular belief that–iconic Super Bowl commercials notwithstanding–herding cats is impossible.

And nowhere is that clearer than when they take over the bed. Case in point: 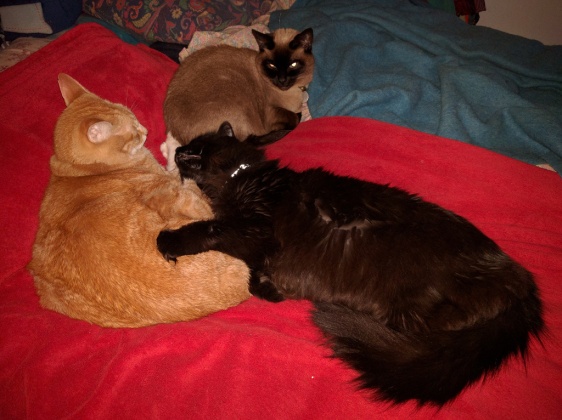 Note Yuki’s untidy sprawl and their asymmetrical arrangement. Rhubarb’s Ears of Disapproval may be as much for the sloppy design of their collective pose as for the claws in his back and Yuki’s catfood breath.

But every so often, probably just to keep us guessing, they pull off something quite artistic.

Observe the careful balance of the gentlemen: Rhubarb’s tail echoing ‘Nuki’s hind leg, the inverted symmetry in the angles of their bodies relative to the baseline (the edge of the bed).

And then there’s Sachiko in the central position. Her tail is extended straight back in counterpoint to the curves of her elders’ hindmost parts. Her face is turned to an angle almost exactly midway between Watanuki’s full-face and Rhubarb’s three-quarter.

But despite her youth, she shows strong artistic instincts, carefully positioning herself at a slight angle, rather than taking up a perfect perpendicular to the baseline. Had she done the latter, the composition would be lackluster; a bit of competent draftsmanship at best. Instead, her choice elevates it to art.

I can’t prove that she’s the primary artist behind this bit of living sculpture, but it wouldn’t surprise me. Performance art is, of course, instinctive in cats. But if Sachiko arranged this bit of theater at her tender age, well, one hates to throw around terms like “genius” and “prodigy” of one’s family…