It’s been a while since I’ve said anything about the Backyard Bunch.

They’re still around. Almost every afternoon, they gather beside the house, waiting for sundown, when one of us will bring out Teh Krunchiez.

They’ve decided we’re acceptable to their refined sensibilities. MM, exuberant young lady that she is, usually rubs against our legs when we show up. This has more than once led to hurt felines when we move in the wrong direction and step on her toes.

GT and Tuxie are more restrained, probably because MM demands–loudly, in a very Siamese quack–most of the attention and won’t hesitate to discipline anyone who gets between her and a petting. The gentlemen are reluctant to take more than one or two paw-slaps to the muzzle on any given day, so they generally back off and wait until MM is distracted by food before they request pettings of their own.

Yes, they do all enjoy pettings, surprisingly enough.

Once we get the food bowls filled, pettings become less important. Eating is srs bidniz.

And everyone has their preferred bowl. Which isn’t to say that they always stick to the same bowl… Well, MM always gets her bowl–the blue one that matches her eyes (although her eyes, unlike the bowl, don’t have “Pussy” printed across them)–but Tuxie and GT sometimes swap. I presume they’re in search of variety, even though it’s the same food in both bowls.

Still, as long as they’re eating, who am I to tell them they’re being silly? 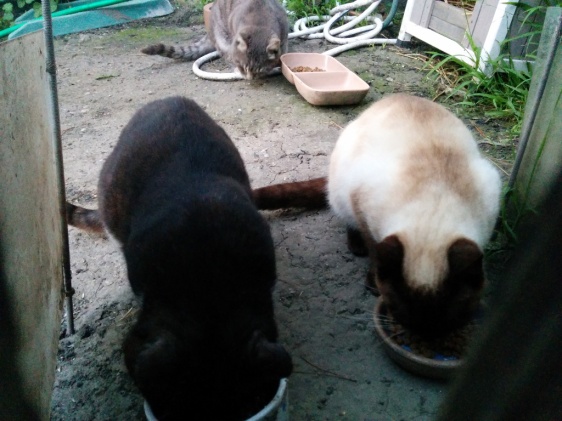 2 thoughts on “Checking Back”