“What the…?” is a handy phrase. Two short words and two punctuation marks allow you to express a range of sentiment, from “That’s odd,” through “Oh, my god!” to “Are you out of your mind‽” That flexibility is wonderful in speech, but it comes at the cost of clarity in writing. Regular readers are aware that ambiguity is QA’s choice of Public Enemy Number One. Outside of a few special cases, it’s just as bad in fiction.

As a result, “What the …?” rarely appears by itself in dialog. Instead, authors add one of several clarifying words. Let’s take a look, shall we? Warning: some mildly NSFW language ahead.

“What the heck…?” In this phrase, the ellipsis generally stands for the phrase “is that/this”; the formulation denotes curiosity or a low level of puzzlement. One might, for example, use it as I did when I found this object in an antique store recently.

The shop owner suggested it might be a cheese fork. I’m dubious because in my experience cheese forks typically serve double-duty as cheese slicers, and neither edge of this object is sharp enough to slice even the softest cheese. You might be able to crumble a blue cheese, but even in a field notorious for single-tasking tools, that seems improbably specialized.

It’s clearly not a primitive spork, as it lacks even a hint of a bowl. The tines are not just decorative; in particular, the outside pair are quite sharp.

“What the hell? Note the lack of an ellipsis in this variant. Hell stands for nothing but itself. The phrase indicates a greater level of confusion, with added connotations of disgust or dismay. I used it in a supermarket when I encountered these objects: 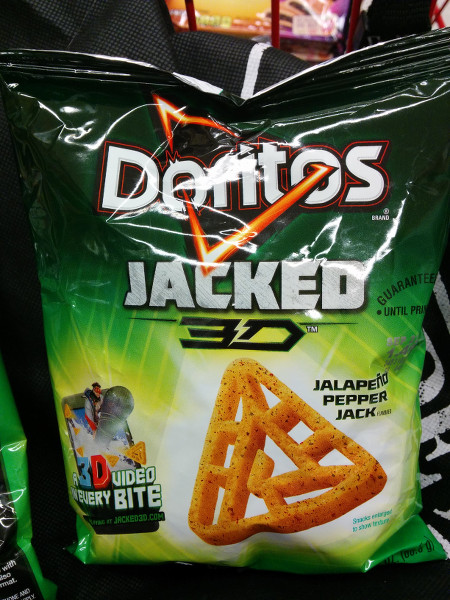 Note the legend at the lower left. That’s right: Doritos has introduced video-enabled foodlike substances. Allow me to put my curmudgeon pants on. Back when I was a kid, good manners included the proviso that one should not play with one’s food. (The rule was formulated as “Eat it or leave it, but don’t play with it!”) Apparently modern civilization has reached the point where playing with your food is actually expected!

(For the record, the way this works is that there are several different shapes of chips in the bag. You scan a chip with your smartphone’s camera and upload the picture to a website run by Doritos. The website then uses the chip’s shape to decide which of several videos to display on your phone. Of course the videos are in 3D, because 3D is hip today. But you do need to supply your own red/blue glasses, as they’re not included in the package.)

I was ready to condemn this as yet another sign of civilization in decline, but after considering it, I’m not so sure. According to the nutritional information on the back of the package, it holds three servings. I’d be willing to bet that most people consider a bag this size to be a single serving and scarf it down in one session. But if scanning and watching the videos encourages the consumer to eat more slowly, they may fill up more quickly and leave some chips for a later time. Alternately, consider how obnoxious it is for several people to look at one phone; that may result in people sharing a bag of these miracle chips so that each person can watch the videos on their own phone.

Even with the possible health benefits, video-enabled chips are a definite “What the hell?”

“What the fuck‽” (No ellipsis and an interrobang instead of a question mark.) Indicates extreme dismay and a complete failure to process information. As, for example, when you encounter something like this:

Click to see this at full resolution, but in case you can’t read the text–and, given the obnoxious color choices some designer made, you probably can’t–allow me to transcribe.

This is “Black Snail Repair Cream” from Holika Holika, and it contains “70% of Korean Black Snail Slime Filtrate”. Despite what the name implies, it’s not shell glue for the use of veterinarians specializing in invertebrates. No, this is for “Whitening & Anti-wrinkle care” and it’s a “Premium Cream infused with Black Snail slime to revitalize and replenish your skin for a youthful glow.”

Yes, you really read that. The package goes on to explain that “Korean Black Snails, 10 times larger and richer in secretion than normal snails, soothe and protect your skin from environmental damage, strengthen skin barrier with absolute skin hydration.” It then directs you to “Apply and gently massage your face until absorbed.”

Uh-huh. Massage snail slime into my face to make me look younger. Sure. I’ll get right on it–after someone explains who came up with this idea and how. I’m picturing someone staggering home after a long night drinking with the gang and falling asleep in the yard. Hours later, he awakens covered in snails. He dances around the yard, screaming and batting snails off his skin. Invertebrate-free, he then steps inside, only to be thrown out again by his wife, who refuses to believe that the young-looking dude covered in slime could possibly be her hard-drinking, scaly-skinned husband.