Yes, this really is the traditional Friday cat post. Bear with me a minute. We’ll get there.

MLB and the individual teams are always on the lookout for new promotional items. They’ve been making bobbleheads since 1960, and the Giants’ 1999 Willie Mays bobblehead is credited (or blamed, depending on your point of view) for permanently linking baseball and bobbleheads in the public consciousness.

So what did MLB do to keep collectors interested? Why, the gnome, of course. The inspiration is clearly the traditional garden or lawn gnome, but the baseball collectible version is smaller and lighter. I wouldn’t recommend putting them on your lawn, unless you want to watch the first breeze blow it down the street.

Last year the Mariners released their first gnome, featuring Dustin Ackley. We got one because, well, because. But we figured one gnome was enough.

Trust the As to screw that resolution up. This year the As decided to give away a Coco Crisp gnome. Mr. Crisp is Kokoro’s favorite player (around our house, they share a nickname: he’s “Coco-poof” and she’s “Koko-poof”), so of course she immediately demanded her own Cocognome. How could we possibly have resisted her appeal?

Circumstances conspired against actually attending the game where the gnomes were given away, but fortunately we were able to pick one up on eBay. It’s… disturbing.

Kokoro took one look at it and said “Who the heck is that?” She’s got a point. Coco-poof doesn’t look nearly so demonic in real life.

So Kokoro was dubious.

We called in Kaja for a second opinion. She wasn’t impressed either.

It’s been a couple of months, though, and Kokoro has become comfortable with Cocognome. She takes him everywhere, even into the bath. 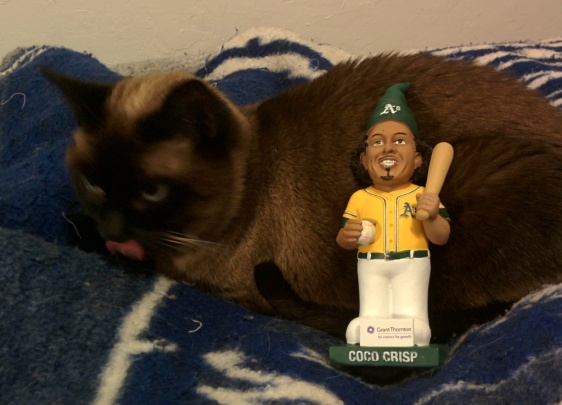 So peace has been restored in the house.

A PS: Coco-poof is battling a chronic degenerative neck injury, and has been in and out of Oakland’s lineup this year. Despite our general disdain for the As, we have nothing but respect for Mr. Poof–sorry, Mr. Crisp–and hope he’ll return to action soon. Cocognome not withstanding, Ms. Poof misses the real thing.