No, no, the other Thanksgiving. We’ve already talked about the baseball one.

Note that this post was written a couple of days ahead of time. That means two things: I can’t complain if you wait a couple of days to read it, and I can’t comment on anything wildly topical. If an asteroid hits the Earth this afternoon, causing earthquakes, tidal waves, and the end of civilization, I’ll be sure to post something snarky about it on Friday.

Anyway, I’ll bet you were all expecting me to commemorate the occasion with a long list of things I’m thankful for (“Thanks to Maggie for putting up with the inconveniences caused by my career change,” and so on.)

I could do that, and it would certainly fill my quota of words for the day, but let’s face it: nobody ever reads that sort of list. They either tl;dr it or just Ctrl-F it for their own name. If you’re not going to read it, I’m not going to spend my time writing it. Let’s talk about something else.

Thanksgiving in its modern form is an occasion devoted to laziness and the consumption of one of my favorite foods: turkey! How could it not be one of my favorite holidays? I know many of you reading this aren’t meat eaters, so I’ll spare you most of the potential rhapsodies over the joys of turkey-eating. I’ll also spare you the recipes, since we don’t actually have any. We do a simple roast of the bird without stuffing, most of the leftovers go for sandwiches, and the carcass goes for soup. (I will note that vegetarians — at least the honest ones* — have been known to acknowledge the fact that a roasting turkey smells delicious.) 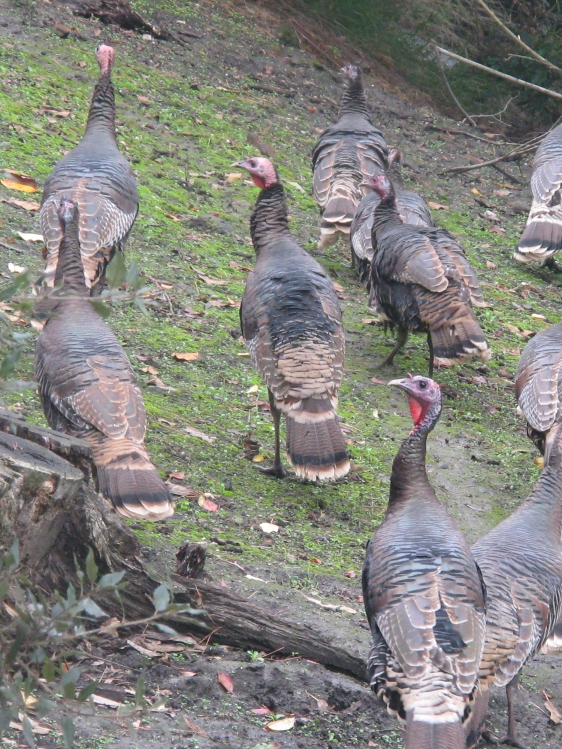 Those of you who don’t live in the Bay Area may not realize that the wild turkey population has been growing in recent years. There’s a flock near our house, so I’ve been able to keep an eye on them. The wild birds refuse to let The Man push them around. They have definite issues with obeying traffic laws. They’ve figured out that cars will stop for them and create traffic jams by wandering across the road en masse, usually near the freeway on- and off-ramps.

As I was writing this, eleven turkeys strolled out of the parking circle a couple of doors down. They looked around, then set off slowly down the middle of the street in single file. About two minutes later, a group of four more birds came running out of the loop and took off down the street. Obviously they were embarrassed about running late for the expedition. Then, over the next few minutes, another half-dozen turkeys came running out of the loop one at a time. Each of them stopped at the sidewalk, looked around anxiously, and then strolled casually down the street, radiating an aura that said “Oh, I’ve been here the whole time. Just stopped to tie my shoe.”

Why did the turkey cross the road? Because if he stood in the middle, he’d get run over.

Actually, the local turkeys’ favorite on-ramp is just a few turkey-sized steps away from a synagogue. With Thanksgiving falling in the middle of Hanukkah this year, it’s making for some unusual events. I’m pretty sure I saw a couple of turkeys playing with a dreidel yesterday, no doubt gambling for gold-foil wrapped crickets. This temple holds periodic “jewgrass” services* throughout the year, however there seems to be no truth to the rumor that a turkey will be invited to join the band tomorrow night. Rumors of turkey hams on the dinner table tonight, however, seem well-founded.

* No, I’m not making that up. Honestly. According to the temple’s website, jewgrass is “a lay-led singing Shabbat service [which] features an instrumental band made up of congregants”. There are not any recordings on the website; I’ll leave it up to you to decide if that’s fortunate or unfortunate.

Speaking of turkey hams… This piece was pre-written to allow me to take the day off. I intend to spend a large part of the day sprawled on the couch, wallowing in the intoxicating scent of roasting turkey, and watching the Mystery Science Theater 3000 marathon.

Oh, and Maggie? Thanks.